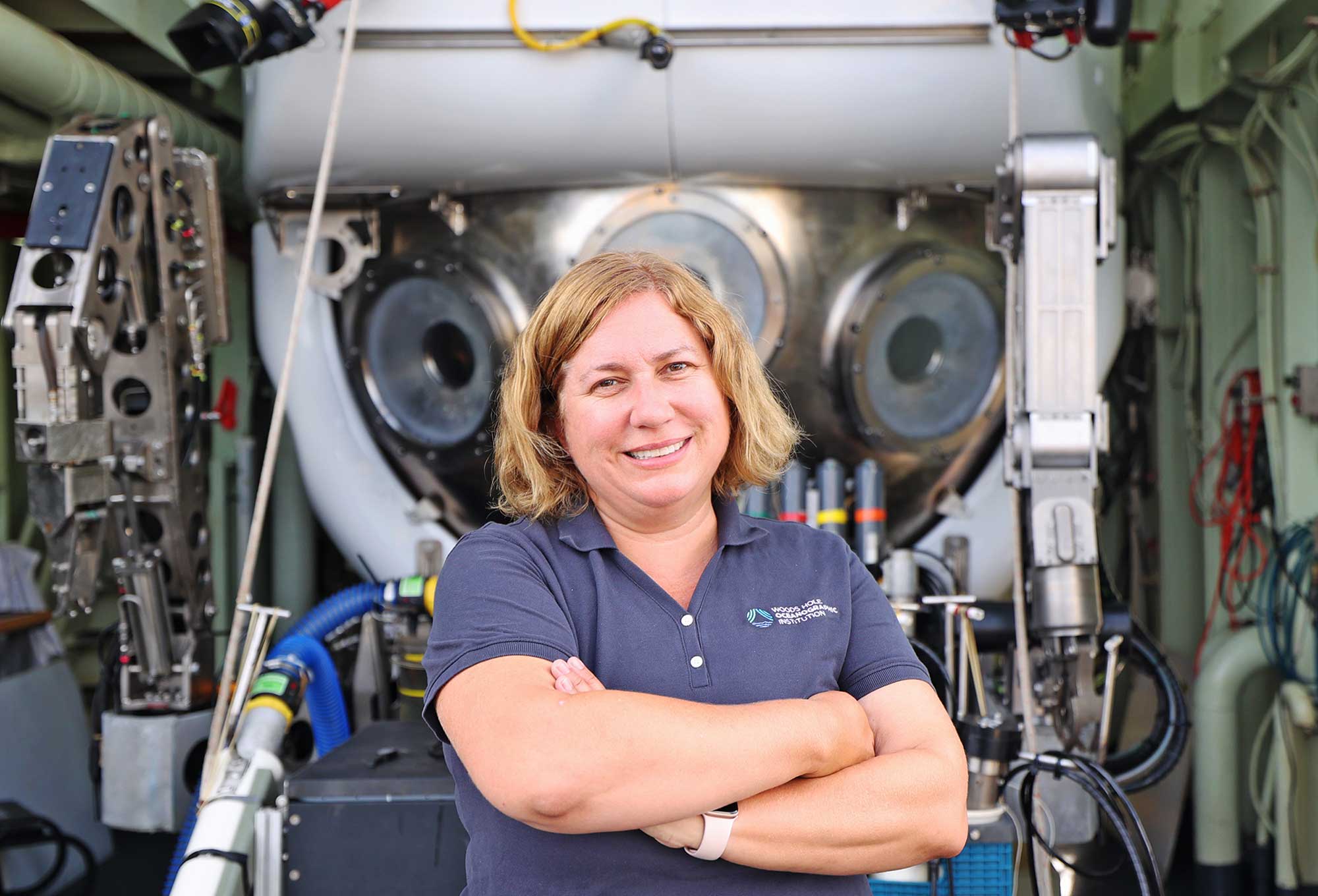 Dr. Anna Michel became Chief Scientist of the National Deep Submergence Facility in 2021. This is her first expedition with Alvin.

For folks who aren’t familiar with the National Deep Submergence Facility, can you describe what it is?

We manage three vehicles specially designed to conduct deep sea science: HOV (human-occupied vehicle) Alvin, ROV (remotely operated vehicle) Jason, and AUV (autonomous underwater vehicle) Sentry. Our facility is operated out of WHOI, but it’s open to everyone.  Any member of the oceanographic community in the U.S. who wants to use one of those vehicles can write a proposal and submit a request for funding and ship time.

We really want to encourage scientists from all over the country to submit proposals. During this cruise, we have several WHOI folks, but we also have people from 12 other institutions, including the University of Puerto Rico Mayaguez and the Department for the Environment in the Cayman Islands. As much as possible, we want to include people who live and work in the places where we’re conducting research.

Why are you excited for this expedition?

It’s my first dive in Alvin which is super exciting. But I’m also excited to introduce a diverse group of new users to Alvin, especially early career scientists. It gives them the opportunity to see the sea floor up close and direct the science operations. I think that’s really important from a scientific perspective, but it also teaches leadership by putting the decision-making directly into their hands.

What does “Science Verification” mean in this context?  What does this expedition mean for the scientific community as a whole?

This is the first time we’re doing science after the 6,500-meter certification so our main goal is to put Alvin through its paces. We’re checking out all the tools and components of the sub, like the imaging system and lighting, so that all the teams that come after us will know the best settings and procedures.

At the end of this expedition, we’ll have knowledge that will help future scientists to be more prepared, especially for deep diving. We’re learning a lot about how different it is to dive this deep – the impact it has on both the team and the science. We are actively compiling information to share with scientists who will be planning to conduct research in these depths.

Why are we going to the Mid-Cayman Rise?

This is a really interesting location because it has very deep hydrothermal vents. Some of the sites have been explored by ROVs, but we have some data suggesting there are vents where no ROVs have been before. We’ll get to see firsthand if that data leads us to a new discovery.

We’ll be taking humans down to some of these locations and depths for the first time ever.