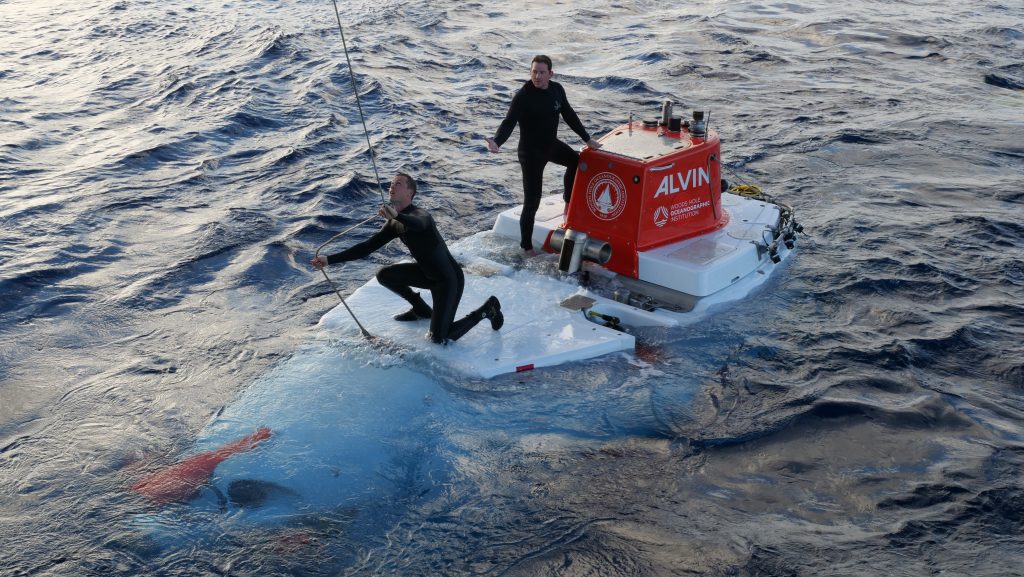 When Human Occupied Vehicle Alvin’s sea trials came to an unexpected halt last November, engineers on Atlantis and at WHOI wasted no time in setting the stage for the sub’s eventual return to operation.

Efforts to identify the cause of damage to Alvin’s syntactic foam began even before the sub returned to Woods Hole, with regular meetings between engineers at WHOI and members of the Alvin Team on Atlantis convening before the ship was within range of Puerto Rico’s cell network. Those discussions focused on two key themes: What caused the cracking in Alvin’s syntactic foam around attachment points to the sub’s frame; and what could be done to prevent it from happening in the future.

At first, suspicion centered on the process of recovering the sub, particularly the moment when the sub is brought under tow behind Atlantis. Underwater, the syntactic foam experiences gradual and equal loading on all sides during descent and similarly consistent unloading during ascent. But when the ship takes Alvin under tow, the forces created when the tow line suddenly becomes taught transfer to the sub, causing the titanium frame to flex around the attached foam. Still, the team couldn’t rule out the possibility that the foam was compressing more than anticipated and it was that line of thought that eventually led to the most likely cause: over-constraint of the foam blocks under pressure.

Instead of sailing back with the ship, lead mechanical engineer Fran Elder flew home directly from Puerto Rico so that he could begin working with Don Peters on failure analysis and on design solutions. Peters is a principal engineer at WHOI who headed the team that redesigned Alvin’s mechanical structures during the 2011-2014 overhaul. He’s also an expert on the performance syntactic foam under high pressure, and he began conducting additional analysis on the sub’s foam blocks in an effort to differentiate between damage that might result from flexing of the frame and that caused by the blocks shrinking.

When Alvin and Atlantis returned home in late November, the Alvin Team first took a much-needed rest. Then they turned to the task of removing the majority of the sub’s foam and fully documenting the damage. What they saw confirmed suspicions that the foam wasn’t being allowed to change shape under pressure. “The stresses caused by shrinking aligned with the damage we saw,” said Elder. ‘It was good evidence we had an over-constraint problem.”

Almost immediately, the team began shipping damaged foam to Engineered Syntactic Systems, which has an accepted method for repairing what turned out to be relatively minor damage. “Foam cracks,” said Elder. “We’ve seen this issue before. Titanium doesn’t shrink, but foam does.

That fundamental difference between foam and frame is difficult to balance. The frame needs to provide rigid support the syntactic foam and other major components of the sub, but the foam needs to be free enough to shrink under pressure (and expand on the way up). The discovery that not all of the sub’s foam showed evidence of damage was telling—blocks on the front of the sub on either side of the personnel sphere (the cheek blocks) and on top of the sphere (the brow) were unscathed and currently remain on the sub. This, said Elder, is likely because they fewer attachment points to the frame and are not as constrained in all dimensions.

Peters and Elder still haven’t completely ruled out the effects of frame flexure, so they’ve continued analyzing both scenarios—frame flex and foam shrinkage—to make sure they’re not overlooking something, but all signs are pointing to the foam being over-constrained. Elder has also begun work on design modifications that will give individual blocks greater freedom to move as they compress. But he has to do so while still remaining within the U.S. Navy’s requirements that the sub’s systems be able to withstand a 2-G vertical load and 1-G loads in the horizontal and transverse directions.

And he has to do so while keeping one eye on the calendar. Atlantis remained at Woods Hole through January, but will soon depart on some general-purpose research expeditions that will last through spring. In May or June, it will return to Woods Hole and a fully repaired Alvin will roll out of its high bay, ready to resume the sea trials and science verification process and, beyond that, to return to science at 6500 meters.