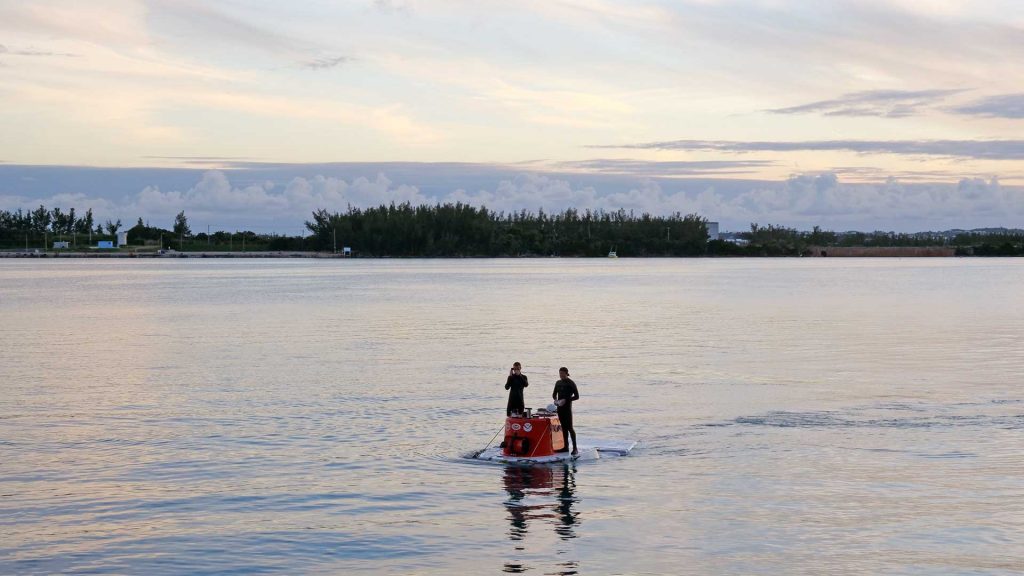 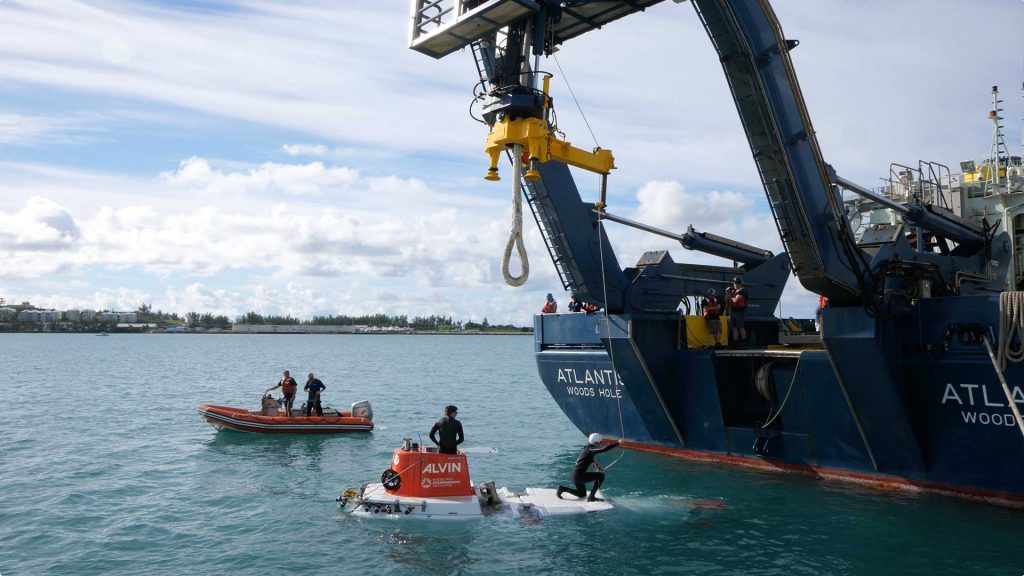 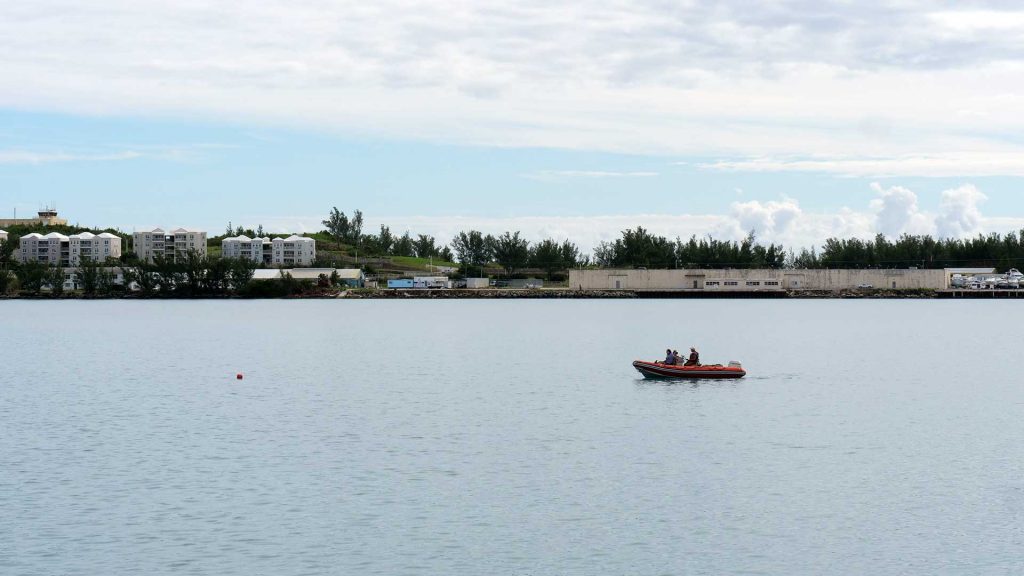 Our view of the harbor dive much of the day: the buoy marking Alvin’s position at the surface. (Photo by Ken Kostel, ©Woods Hole Oceanographic Institution) 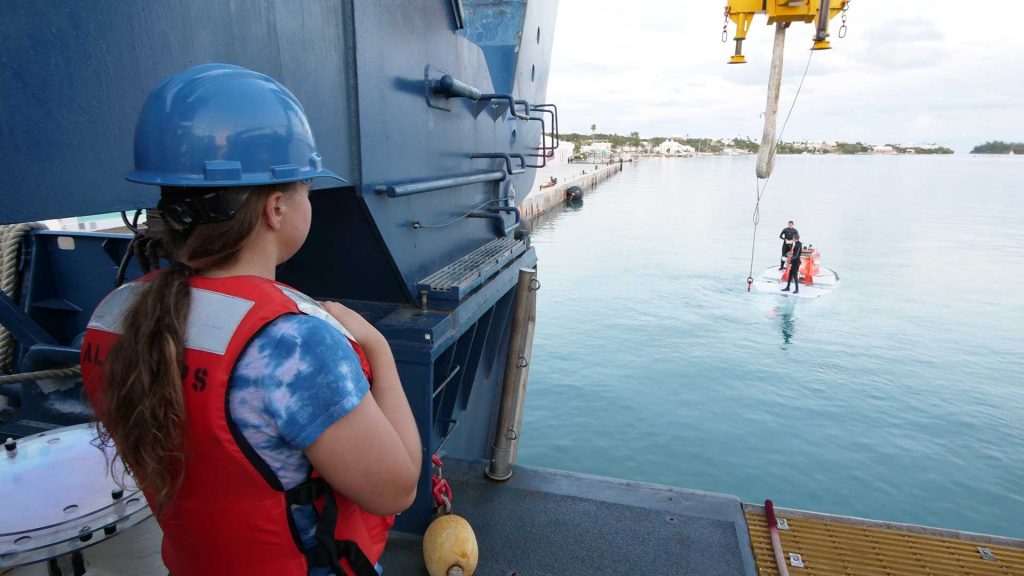 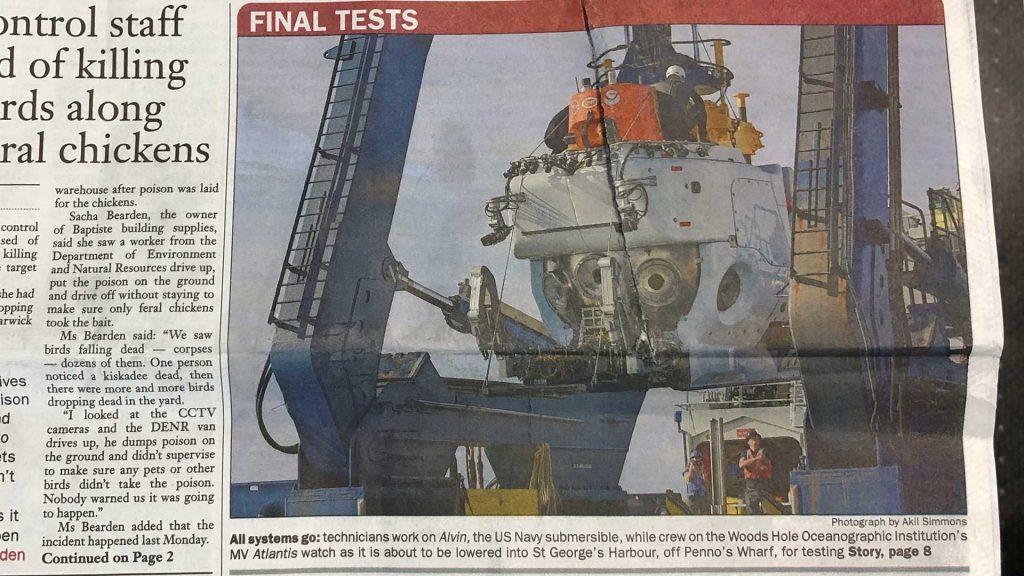 Page 1, above the fold of this morning’s Royal Gazette. (Photo courtesy of Karen Grissette) 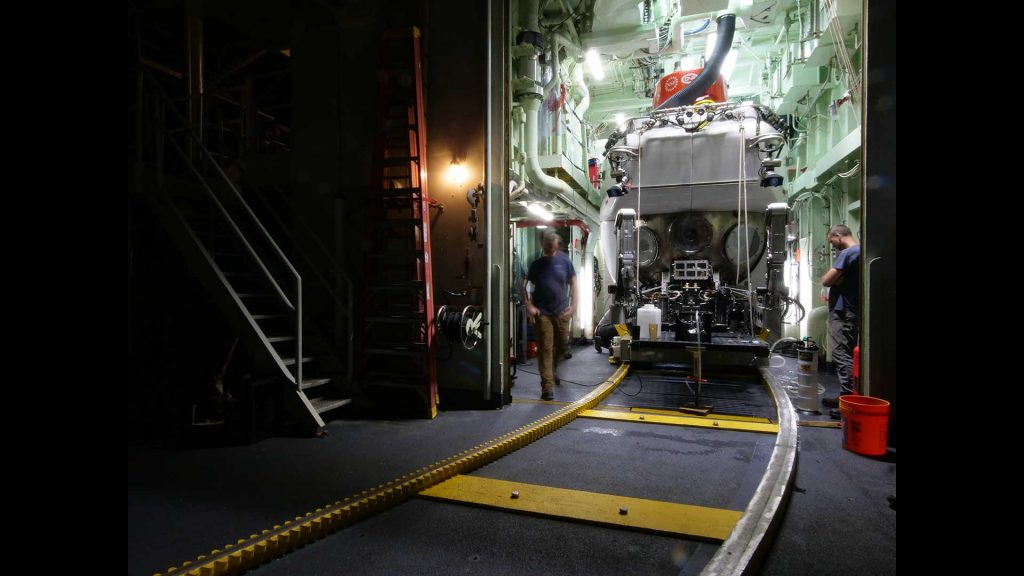 Alvin passed another critical milestone yesterday with its first untethered post-overhaul dives. The goals of the 12-meter dives were to test the sub’s electronics, communications, and navigation systems while conducting a series of maneuvers at the surface and on the seafloor. St. George’s Harbor put out the welcome mat for us with clear skies, light winds and relatively little boat traffic. And when Alvin finally swung over the stern of Atlantis, it was with a small audience of Bermuda media recording the event for print, broadcast, and online outlets.

As far as depth goes, it was a baby step toward 6500 meters. But in many ways, diving a 43,000-pound sub designed to drop four miles through the water at a rate of more than 30 meters per minute is more difficult than a deep, open-ocean dive. Alvin builds up a lot of momentum, and as soon as the sub had left the surface, it was time for pilot Mike Skowronski to put on the brakes, so to speak, and make it neutrally buoyant.

Once down, he had a long checklist to work through, item by item. His co-pilot, Nick Osadcia, and observer, Stefano Suman, were busy, as well. Osadcia is a mechanical engineer who is also a pilot-in-training, so he had to re-acquaint himself with the sub’s controls after nearly two years since his last dive, as well as help Skowronski manage his tasks.

At the same time, Suman continued improving his simulation of Alvin by matching it to an actual dive and also worked on troubleshooting bugs in the sub’s software. Prior to the overhaul that began in 2011, all of the sub’s controls were mechanical switches. Afterward, touchscreens and digital controls made their first appearance in the personnel sphere, but critical systems have retained mechanical back-ups, so that the sub could still be operated in the event of a computer failure. Although that has never happened, Suman was able to make small fixes that further improved the software running Alvin.

But the real star of the show yesterday was the sub’s Doppler velocity log (DVL), an acoustic sensor that keeps track of position by measuring the sub’s velocity relative to the seafloor. Skowronski marked the sub’s start point when it released from the main lift line and, after a full day of maneuvering over the bottom of the harbor, when Alvin returned back to the same position to be recovered, the DVL showed a difference of less than six feet from its actual location, which pleased everyone.

After a successful first off-tether dive, today we’ve moved south of Bermuda and the sub is in 100 meters of water. No one is calling this a deep dive, either, but it means we are well and truly on our way to 6500 meters.