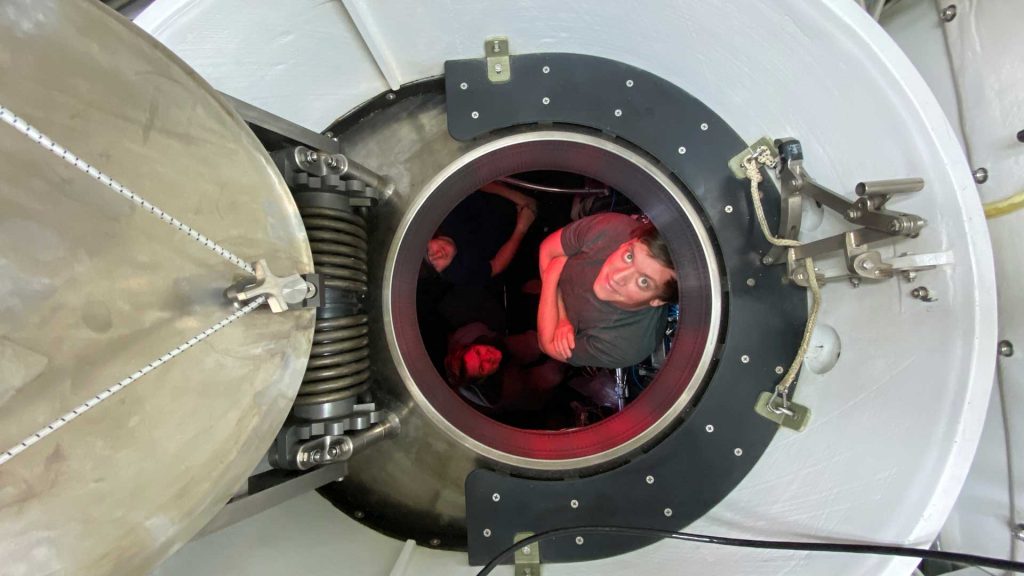 Atlantis hasn’t left the dock in Woods Hole yet and Alvin hasn’t touched the water since the completion of its upgrade, but the sub’s sea trials have already begun. “Sea trials,” in fact, refers generally to preparing the sub to return to operations—an effort which takes place on both land and the ocean.

In August, the Alvin Team began the series of tests mandated by the U.S. Navy’s Naval Sea Systems Command (NAVSEA), and in partnership with the Office of Naval Research and National Science Foundation, to regain the sub’s dive certification and to extend its maximum dive limit to 6500 meters.

The first test was of Alvin’s external components that can be released in an emergency. Then, the team simulated a dive with no one in the sphere and took air samples from inside to ensure that the sub’s electronics were not producing any dangerous gases during operation. Passing those hurdles cleared the way for humans to take the sub for a simulated dive (while still on the deck of the Atlantis), which took place last week.

On Wednesday, pilot Mike Skowronski and pilots-in-training (PIT) Rick Sanger and Rose Wall entered the sub, sealed the hatch and remained inside for more than 12 hours, running Alvin’s electrical systems and adhering to a rigorous schedule of gas sampling.

The next day, pilot Danik Forsman, together with PITs Nick Osadcia and Kaitlyn Beardshear entered the sphere and put on their emergency breathing apparatus (EBA) and remained inside breathing emergency oxygen for more than five hours. 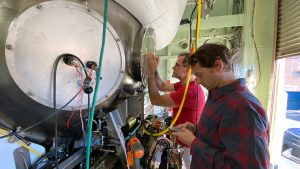 The results of these tests now rest in the hands of NAVSEA, which will make a final ruling about whether Alvin can enter the water. When it comes, Atlantis will prepare to sail, with the first stop being St. George, Bermuda. Once there, Alvin will undergo a series of balance checks on the ship’s A-frame and then complete some shallow dives in the harbor before proceeding south for its first deep dive in nearly two years. Each dive after will be progressively deeper until the sub reaches its new maximum depth rating, with formal certification coming soon after the sub returns to the surface.

If all goes according to plan, Alvin should have its certification to dive to 6500 meters by mid-November and after touching in San Juan, Puerto Rico, a team of scientists will board Atlantis to take Alvin out on its Science Verification Expedition (SVE). They will metaphorically kick the sub’s tires and test the ability of its upgraded systems to collect samples, conduct observations, and basically try everything Alvin needs to do to give researchers who use the sub access to even more of the ocean and seafloor.

We’ll keep up regular posts through sea trials and the SVE so that, whether you are a regular user of Alvin, a prospective user, or simply a member of the general public who, like everyone on the Alvin Team, thinks exploring and understanding the deep ocean is an important undertaking, you’ll be able to get the latest news about Alvin’s progress to 6500 meters and the return to science.