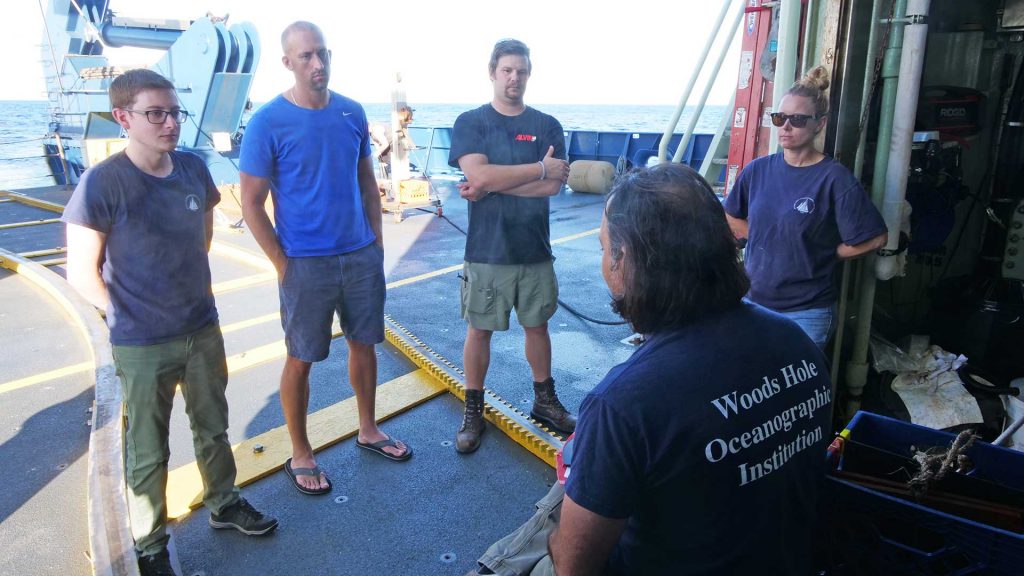 New Alvin divers get an introduction to the sub before the final series of dives on sea trials. (Photo by Ken Kostel, ©Woods Hole Oceanographic Institution)) 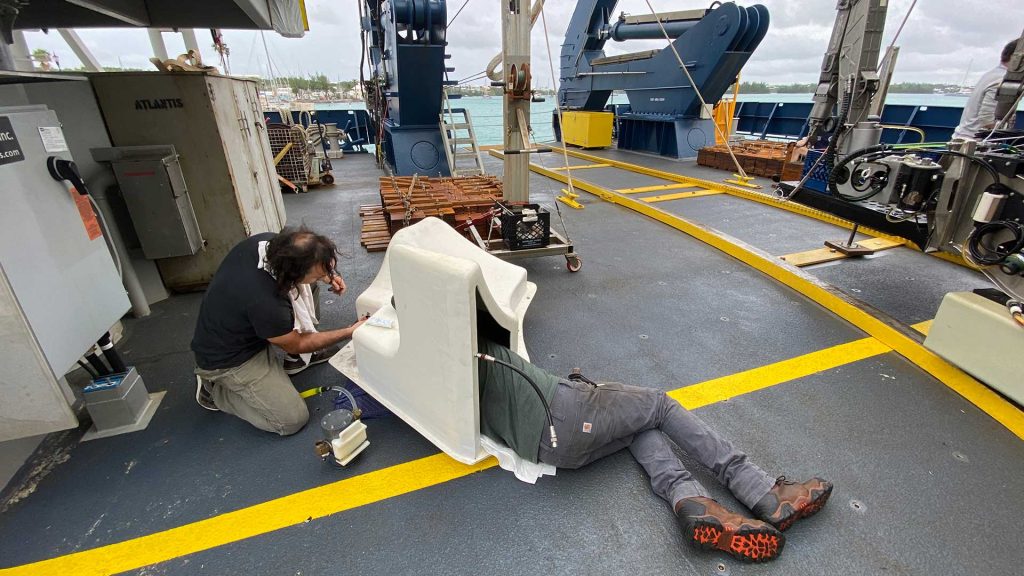 The Alvin team really gets into their work. (Photo by Ken Kostel, ©Woods Hole Oceanographic Institution)) 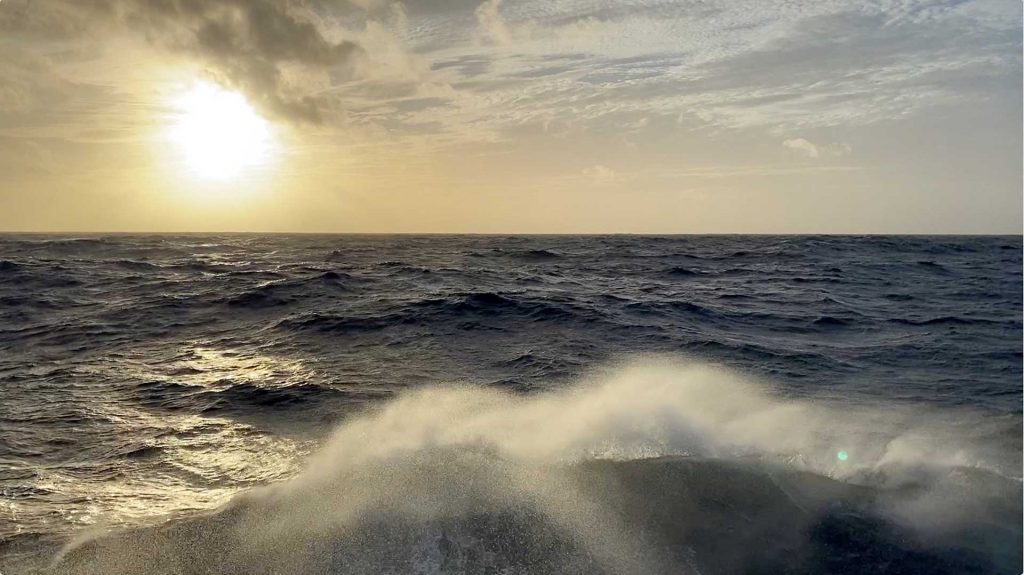 Rough weather at the start of our transit to Mona Canyon made for a bumpy ride, but beautiful sunsets. (Photo by Ken Kostel, ©Woods Hole Oceanographic Institution)) 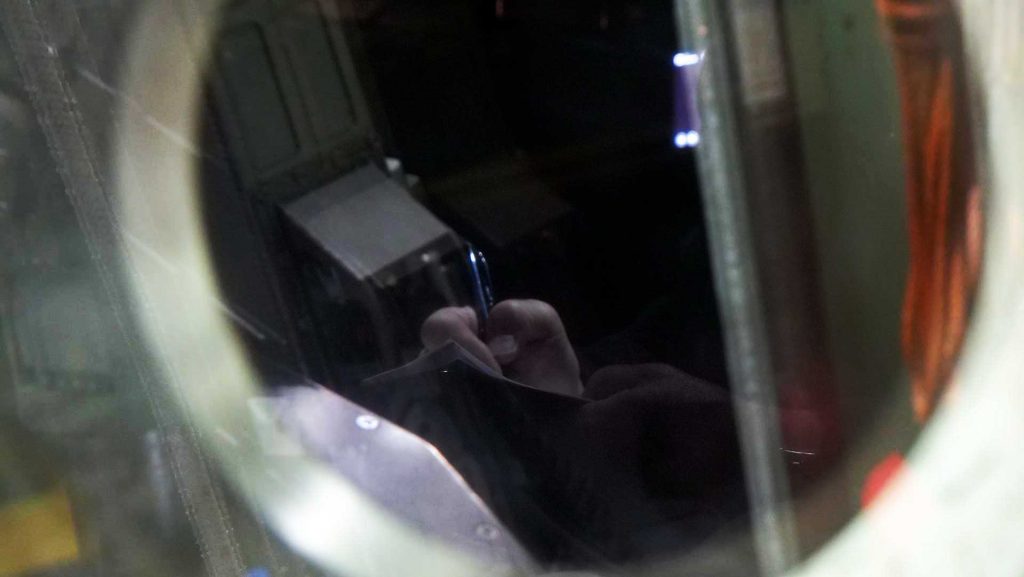 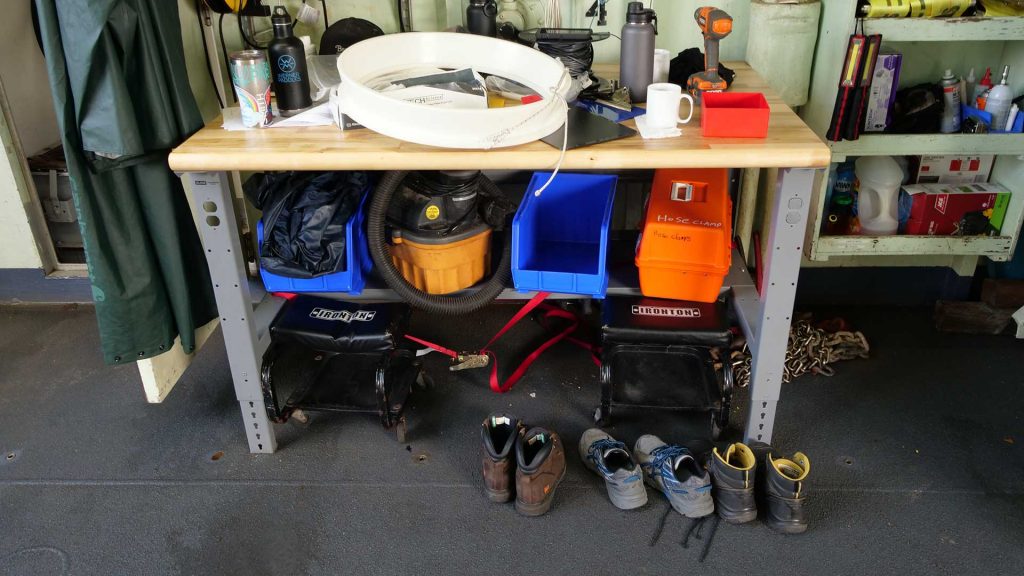 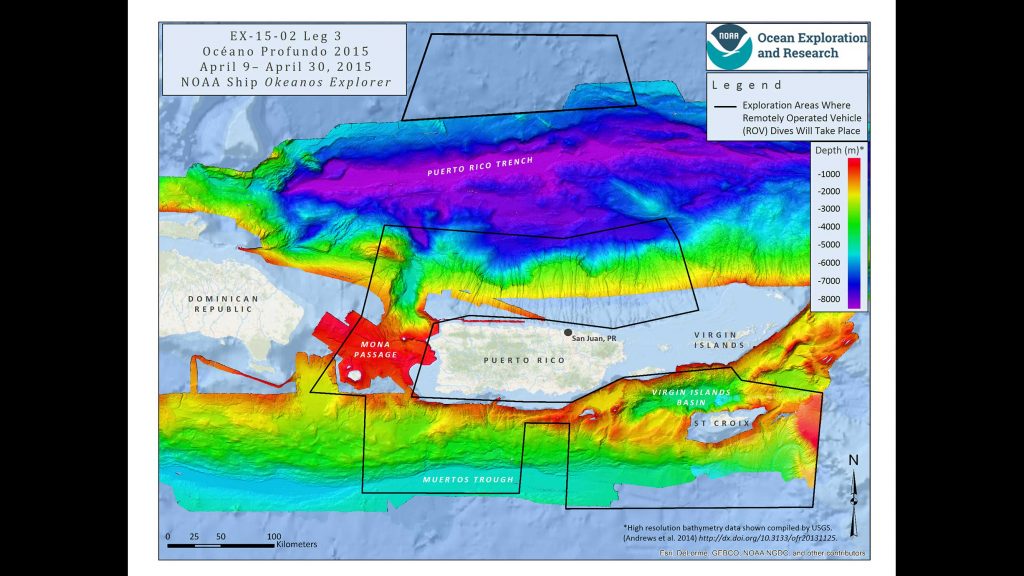 On Tuesday, we got word that we have a location to get back on the road to 6500 meters: the east wall of Mona Canyon northwest of Puerto Rico. And after nearly three days in transit, we expect to arrive in the early morning hours of Thursday to do some seafloor surveys with the ship’s multibeam sonar.

The canyon slopes down to the north, from the shallow Mona Passage separating Puerto Rico and the island of Hispaniola to the much deeper water of the Puerto Rico Trench. We didn’t have much information about it when it appeared as a likely dive site, but a little digging revealed that we will not be the first to dive there. Our friends on the NOAA ship Okeanos Explorer took the remotely operated vehicle Deep Discoverer in 2015 to almost the same location as our dive today. That expedition included some scientists who have dived in Alvin before, and a few quick emails to shore brought back a wealth of information about the conditions they encountered: No, currents were not a problem. Water clarity was excellent. Check the dive site for seafloor cables. Be on the lookout for lots of good geology.

Although this isn’t a science mission, it’s difficult not to dig into details about the canyon. It was formed, and continues to grow, as a result of extension occurring along the edge of the Caribbean tectonic plate where it meets the North American Plate. This is causing Puerto Rico and Hispaniola to separate at a rate of about 3-5mm/year, making it a seismically active area, as the people of Haiti can attest after the number of earthquakes that have affected the country in recent years.

Moana Canyon also bears the scars of several submarine landslides, one of which is probably the cause of a tsunami that hit western Puerto Rico in 1918 and killed about 100 people. After the 2005 Indian Ocean tsunami, this region received renewed interest as one of the few places in the Atlantic that could threaten the U.S. East Coast with a tsunami. Uri ten Brink from the USGS office back home in Woods Hole was co-author on a 2008 paper about the 1918 tsunami.

It also turns out that ours will not be the first visit to Mona Canyon by Alvin. In 1976 and 1977, trips led by Columbia University geologist Bruce Heezen—of the famous Tharp-Heezen map of the seafloor—explored parts of the canyon. In fact, when we compared our dive coordinates with those of past Alvin dives, it turned out that Dive 707 began almost exactly where we hope to end up.

Alvin will start at 1900 meters and head down to its first set of NAVSEA checks 100 meters lower. From there, the team inside will pick one of two paths down the side of the canyon, stopping every 500 meters to conduct more checks and, if successful, finish the day at 3500 or maybe even 4000 meters. That will set up the first 4500 meter-plus dive by Alvin on Friday and put us on a good course toward 6500 meters on Sunday or Monday. There is still a lot to do before then, but the weather looks good down here for diving, the sub is ready and the team is rested and ready to go.