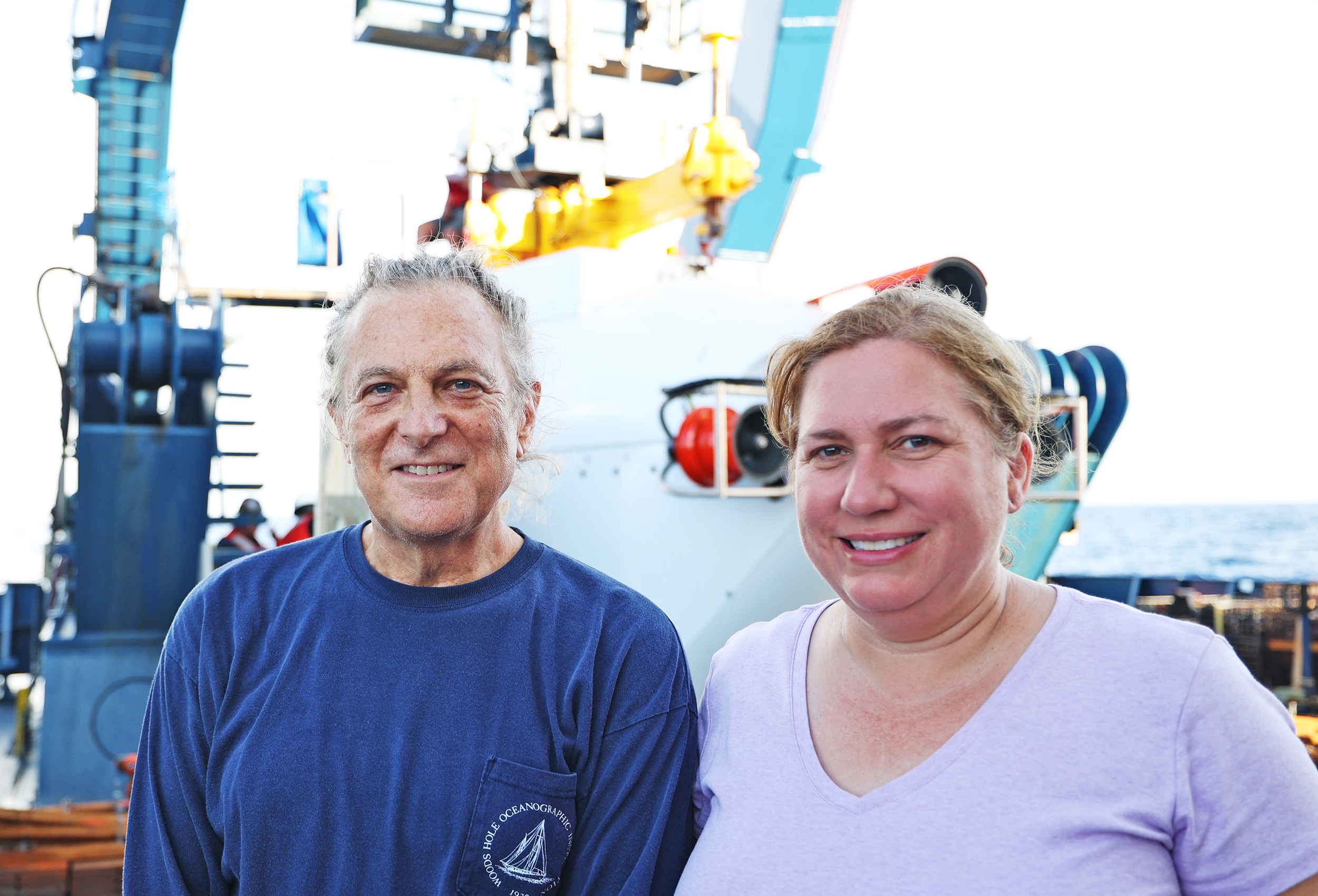 Dr. Anna Michel sits very still, with her back perfectly straight, her eyes focused and intense. It’s just before 7am, and a few early-risers bustle around the Main Lab, chatting over fresh cups of coffee.

I recognize her state of forced calm. A common requirement of professional adventurers, Michel is actively pushing any fear or uncertainty out of her mind to focus on the task at hand.

I approach her. In what I hope is a lighthearted, cheerful tone, I ask how she is feeling.

She exhales a deep breath. “Good,” she says, with a slight note of determination in her voice. “I’m ready.”

While Michel has worked in the deep ocean for her entire professional life, sending dozens of ROVs and instruments to the seafloor, she herself has never made that journey.

An hour later, the Alvin team and science team gather on the aft deck. Between a port stop in San Juan and a three-day transit across the Caribbean Sea, it has been almost a week since our last dive, and we are all excited to see Alvin enter the water again.

Michel is joined by pilot Danik Forsman and underwater volcanologist Ken Rubin. The three chat excitedly about their goals for the dive today.

The main objective is an ambitious one: locate and document a hydrothermal vent field.

During previous research cruises to this area, data from CTD casts showed elevated levels of methane and other measurements that would indicate hydrothermal vents may be nearby.

After diving down to a depth of 4,590 meters, Michel, Forsman, and Rubin begin making their way slowly up a moderate slope, keeping their eyes peeled for any sort of vent activity—a shimmer in the water or black smoke—but they see nothing of the sort.

“The punchline is we didn’t find any vents,” Rubin says. “Not even a faint wisp.”

They make another important—albeit slightly less exciting—discovery: the bathymetric data they had used to plan their dive was off.

“We landed in a really rocky area with a steep wall, which was very different from what we had seen in the bathymetric data,” Michel says. “It would have been great to have AUV Sentry to do high resolution mapping and make methane measurements before diving here.” 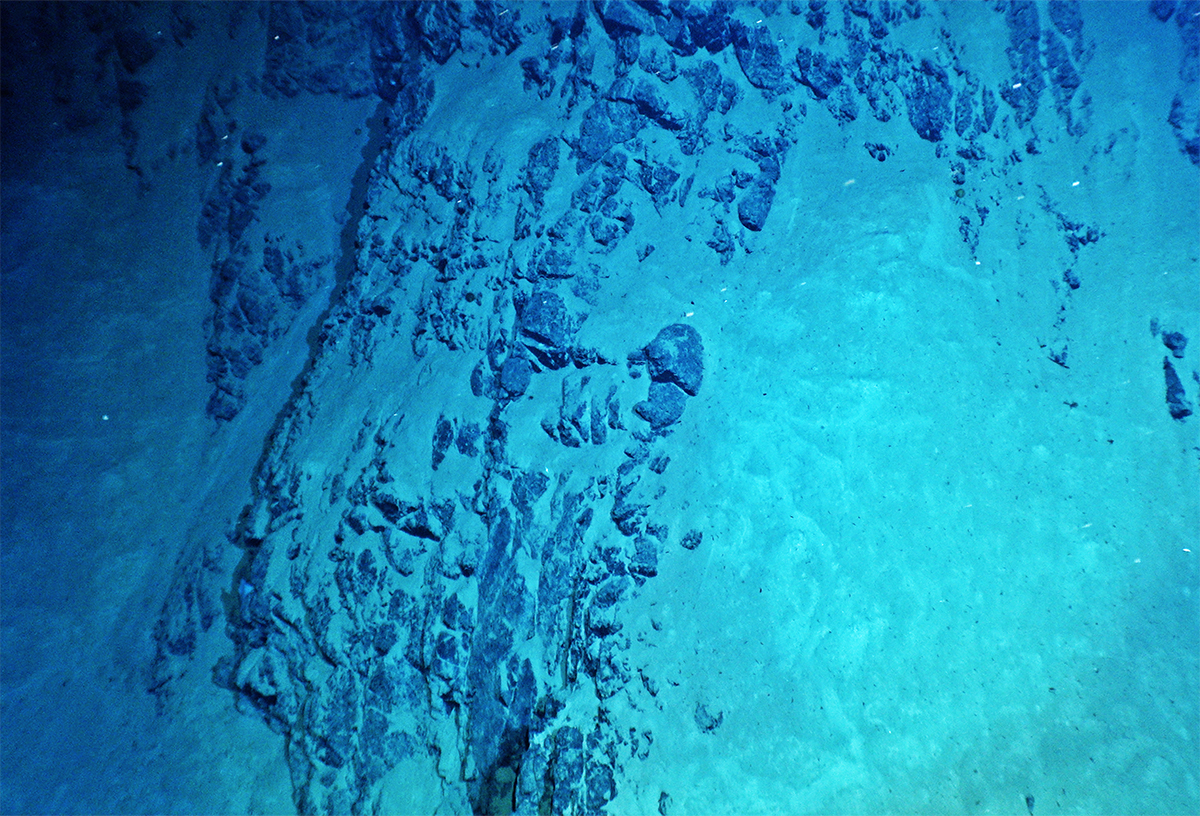 Instead of moving up a gradual slope, they traverse 700 meters of vertical terrain.

“It was like climbing up El Capitan,” Rubin says with a laugh.

As they make their way up the wall, they see about two dozen holothurians (sea cucumbers), but compared to other places in the deep sea, the area is mostly devoid of biology.

Despite the unexpected terrain, Michel was impressed by Forsman’s piloting abilities.

“He did an excellent job of running the sub and getting the samples,” she says. “All while navigating in terrain we weren’t expecting.” 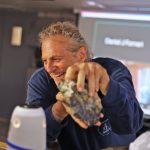 Ken Rubin holds up a rock from his dive to show to colleagues during a Zoom meeting. Marley Parker © Woods Hole Oceanographic Institution 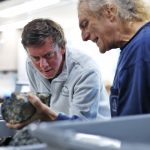 Ken Rubin shows a rock to Danik Forsman that he collected during their dive. Marley Parker © Woods Hole Oceanographic Institution 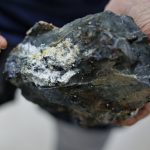 At the end of the day, they return to Atlantis with three rocks and one push core.

After the dive, in the main lab, Rubin uses a trimming hammer to break a small chunk of rock from the sample. He plans to break off just a small piece, but the entire rock cracks in two.

“Wow! Look at that!” Rubin’s eyes go wide in amazement. He holds half of the rock and points to a bright white area. “I’ve never seen a vein like this in the ocean.”

He places it under the microscope and shares his thoughts out loud.

“You would typically see this in continental mountain ranges that have experienced a lot of deep pressure, a long slow process of tens of millions of years,” Rubin says. “What you need is cracking and fluid to percolate through the rock – I’ve never seen this in oceanic rock before.”

Meanwhile, Michel chats with Tim Shank about the difficulty of locating a hydrothermal vent field based on CTD data alone.

Michel nods her head slowly. “I still wonder if it’s there and we just didn’t find it.”