When Alvin submerged for its second open water dive of sea trials on Thursday, July 7, it was operated by Senior Pilot Bruce Strickrott and carried two crew members who have a lot of experience with submersibles of other shapes and sizes.

This was the first open-water dive in Alvin for both Holt and Suman and it took place a few nautical miles south of the first dive, in deeper waters along the continental slope. The goal was to reach 1,500 meters depth while checking all systems every 500 meters throughout the descent. 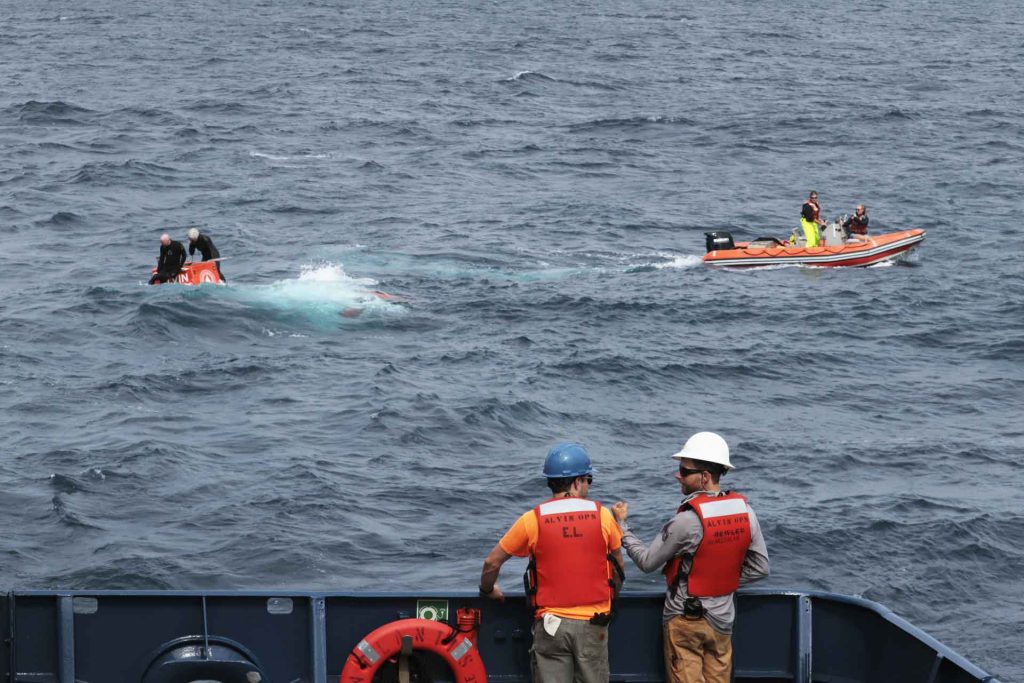 How did an Alvin dive compare to one in another submersible? “It was a great experience,” Holt said. “Alvin really rocks and rolls on the surface since it sits low on the water. But once you’re underwater it is very nimble for a vehicle with 43,000 pounds of mass.”

Holt was also surprised by all the space inside. “To be in a deep submergence vehicle that you can stand up in is a luxury in itself," he said. "Most of them are small. Alvin has a 7-foot sphere and that means room to stand up and space to have lunch. That is really fantastic.”

The other vehicles that Suman works on don’t carry humans, so he couldn’t compare this voyage to another type of conveyance. But this was his first deep dive in Alvin (his other was to 25 meters in Bermuda last year) and he found it occasionally disorienting—in a welcome way.

“I work inside the sub a lot,” Suman said. “And the Alvin descends so steadily that at times I felt like I was working in the hanger, just a little colder. But then I looked outside and the water was actually there.”

In addition to working on perfecting the navigation system, Suman found time to look out the view ports over the course of the dive and catch glimpses of a large octopus and a very large sea spider. There was also a light show. “At about 500 meters we went through bioluminescence. All the lights were out to save energy. Looking outside was like seeing a movie of blue bioluminescence going into the sky.”

For both Holt and Suman, diving gives them insight into their other work for the Alvin Team. “It is a rare opportunity to put our engineers into seats that would usually be occupied by scientists,” Holt said. “Our mission right now is sea trials. We’re in pursuit of certification for 6,500 meters. But this opportunity to test systems in the sub with the people who develop them is really valuable.”

As for the road to 6,500 meters, the objective on this dive was easily reached. The sub got down to 1,400 meters in about 45 minutes and had calm conditions in which to drive Alvin deeper. In the end, they reached 1,655 meters and all systems checked out.