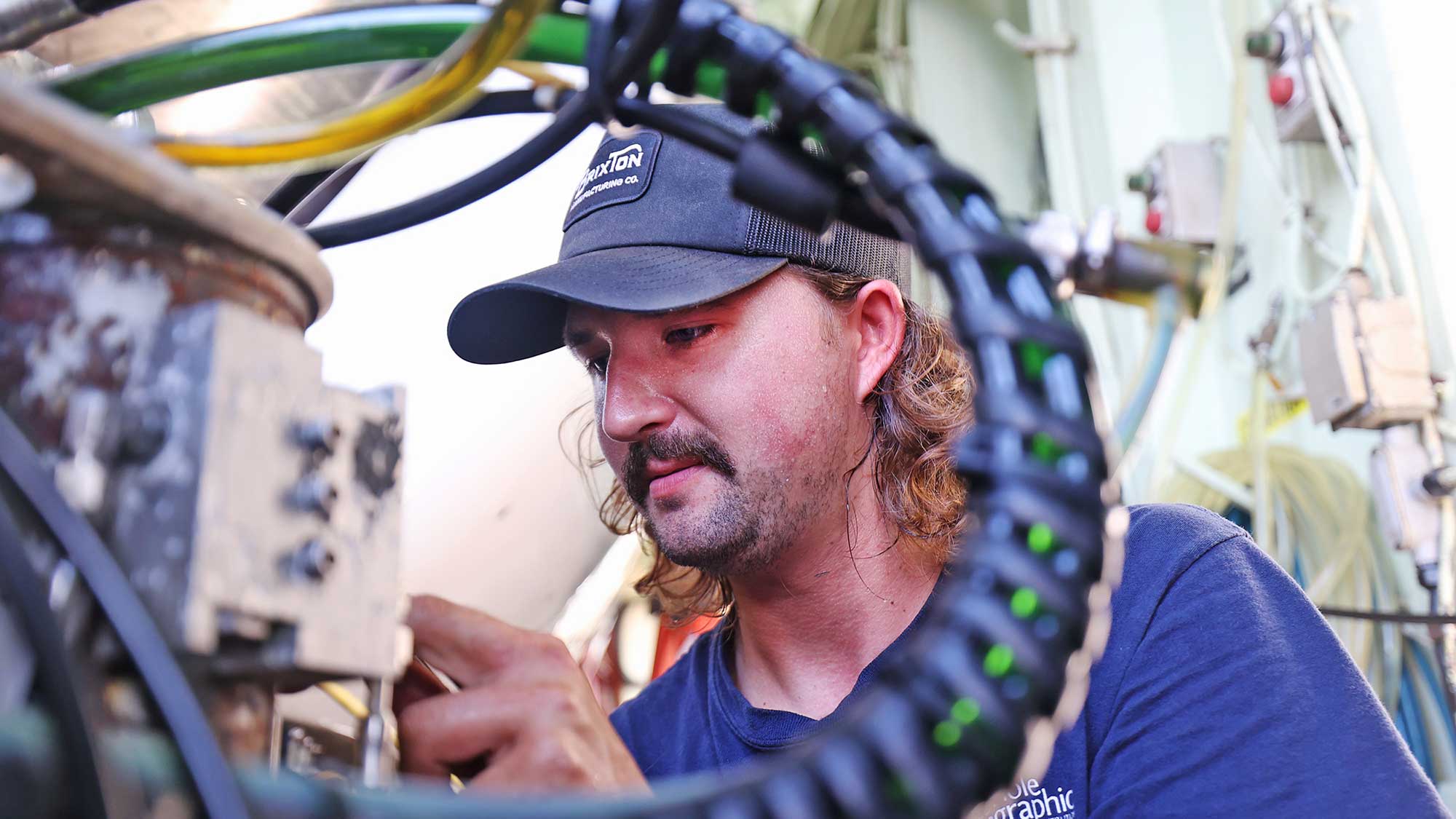 In the ship’s Main Lab, members of the Alvin team and the science team gather for the post-dive meeting. Adam Soule runs through the events of the dive. At the end, he compliments Nick O'Sadcia on his piloting of the sub and asks him to talk briefly about how it felt to operate the sub during his deepest dive yet.

Reserved and modest by nature, O'Sadcia is not one to put himself in the spotlight. But he steps forward and delivers a brief, professional overview to the group.

“We went to a depth of 5661 meters,” O'Sadcia says. “Everything went great, the sub felt very responsive and easy to maneuver.”

O'Sadcia grew up in Plymouth, Mass.—just an hour from Woods Hole, but he never heard of WHOI until his second year at Cape Cod Community College.

“Some WHOI researchers gave a talk at my school, and I thought ‘that place looks like an awesome place to work,’” he says.

Through a few Google searches, O'Sadcia found an internship opportunity in Julie Huber’s deep-sea biology lab that was open to community college students. He applied and was accepted into the program the following summer.

While working in Huber’s lab, O'Sadcia took advantage of all that WHOI has to offer. He attended talks about various science and engineering projects, one of which was all about Alvin.

After that presentation, O'Sadcia chatted with Bruce Strickrott, the Alvin team leader and most senior pilot. As they talked, O'Sadcia knew he wanted to work with Alvin, but he had no engineering experience besides taking a few shop classes in high school. 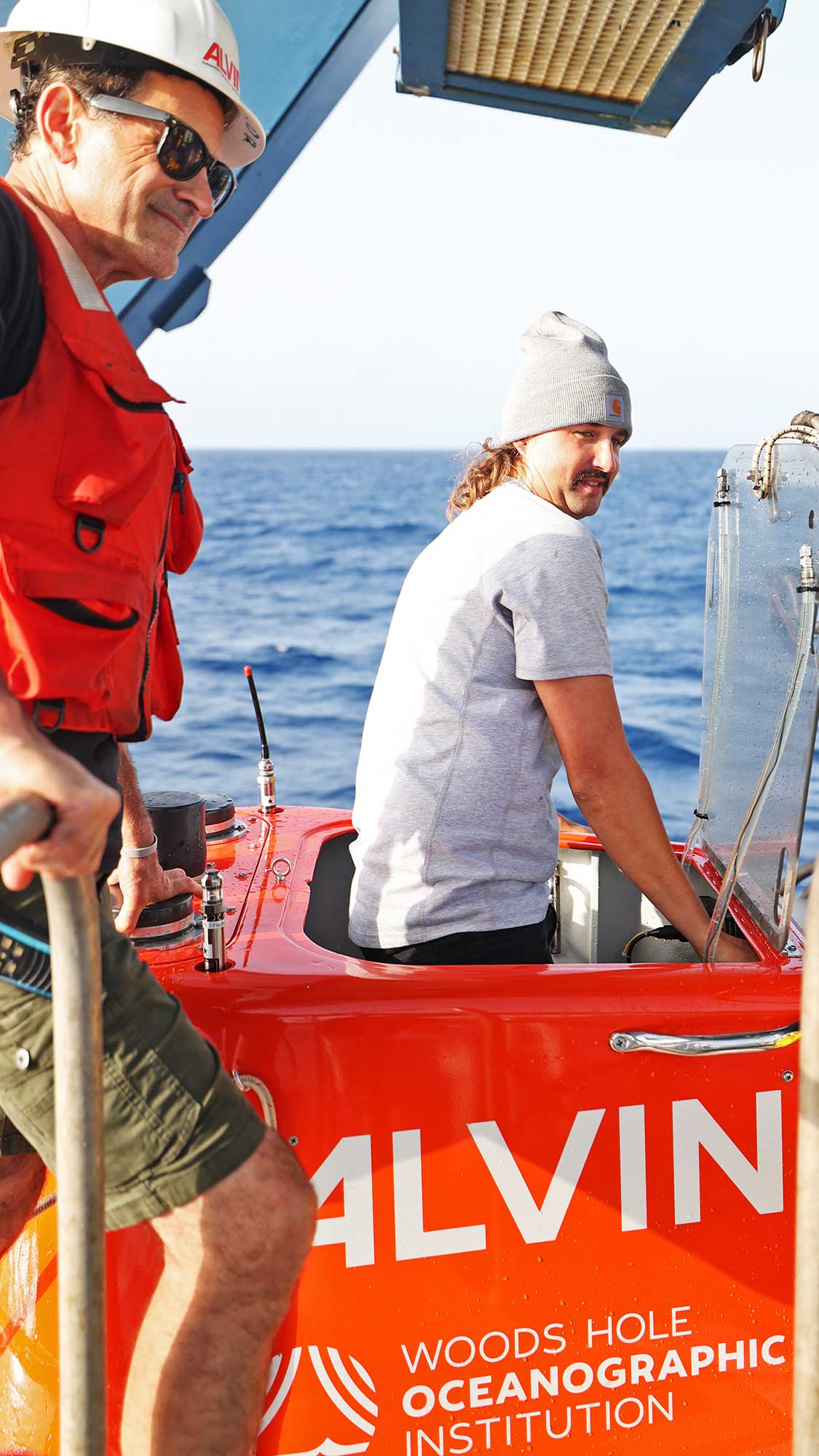 O’Sadcia climbs out of Alvin after piloting the sub on Monday, August 1, to a depth of 5661 meters–his deepest dive maneuvering the sub. (Photo by Marley Parker, ©Woods Hole Oceanographic Institution)

“I had been debating whether to go down the science route or the engineering route,” he says. “By the end of that summer, I decided to do engineering.”

After completing his engineering degree at University of Massachusetts at Dartmouth, O'Sadcia returned to WHOI and officially joined the Alvin operations team in August of 2018.

He completed his very first dive three months later in the Sea of Cortez.

“That was my first time in the sub, and my first time actually operating the manipulator,” O'Sadcia says. “We were doing push-core samples on a bunch of mud flats and microbial mats, and I was awful at it. I’ve gotten a little better since then.”

His second dive came a year later at 9° North, but then Alvin went into its overhaul period at the beginning of 2020, and O'Sadcia didn’t dive again until sea trials in November of 2021.

While his initial dives were few and far between, working closely with Alvin during its overhaul provided a unique learning opportunity.

“The overhaul as a whole—seeing that from the beginning to the end—was quite the experience,” he says.  “It helped with learning all the systems—it wasn’t just taking it apart and putting it back together. It was hand-making all the plumbing and all the hydraulic lines and everything else that goes into it.”

With Alvin back in the swing of regular operations, O'Sadcia now has six dives under his belt.

“Doing regular dives is the most important part,” O'Sadcia says. “I can learn all the systems without diving. But for techniques, like setting up for sampling, you actually have to be down there to learn how to do it.” 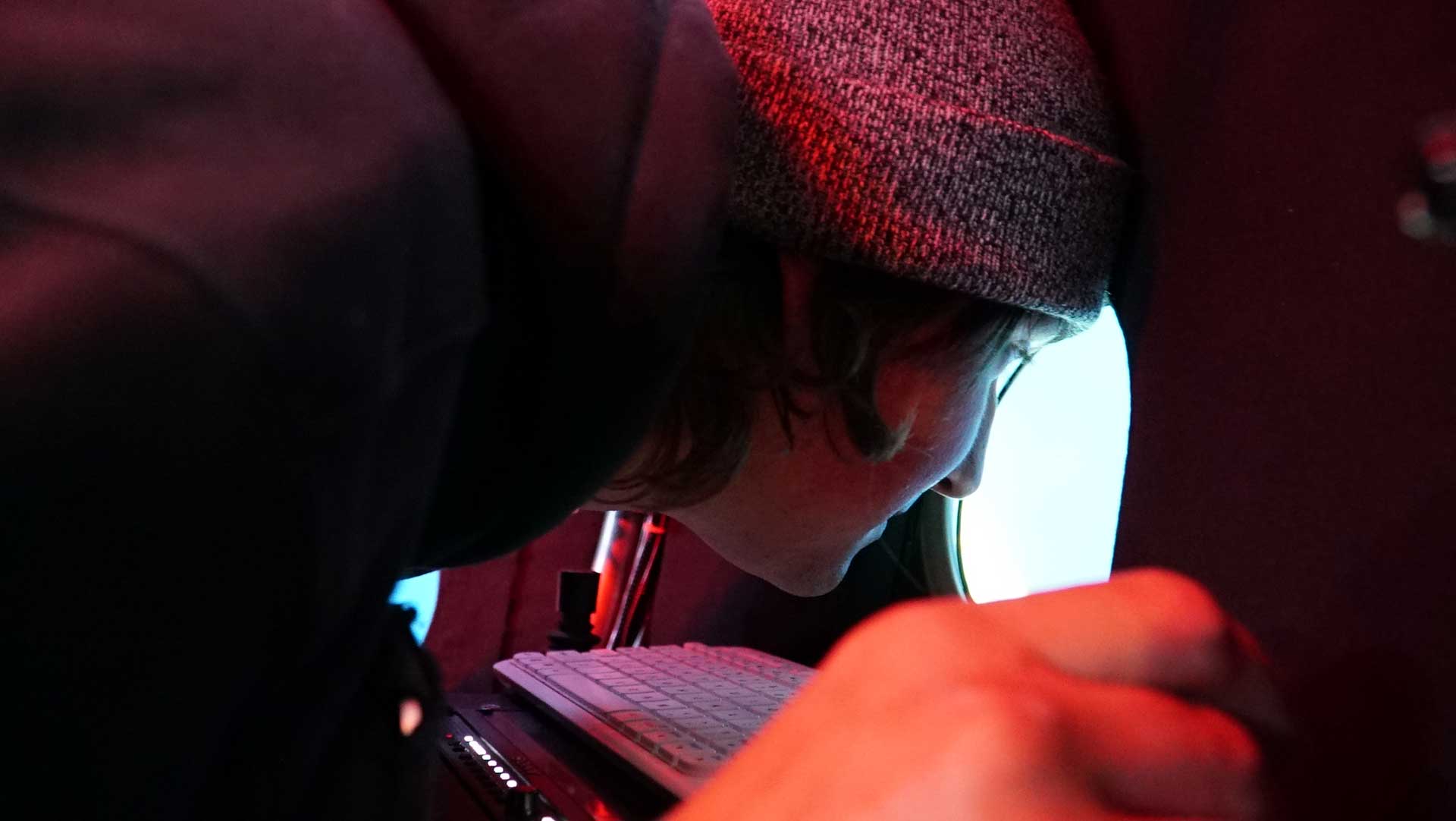 On his most recent dive, Bob Waters sat as the pilot in command, but O'Sadcia operated the controls the entire time.

“It was almost like Bob wasn’t there.” O'Sadcia says. “I was just working directly with Adam the whole time. Bob was looking over my shoulder, but I made it a point to figure out as much as I could on my own.”

“Nick did a great job,” Waters says. “I told him a few small things, but he flew the whole time.”

There is no set number of dives required for Alvin pilots-in-training, but these days, they typically complete 10 or 12.

“When you’re ready, you’re ready,” Waters says. “After he does another four or five dives, I think Nick will be ready.”

Even though O'Sadcia won’t take his official Alvin pilot test (administered through the U.S. Navy) until next year, the opportunity to be part of this expedition in this specific area of the Caribbean has special significance for him.

“I started out on the science side of things, working in Julie Huber’s lab on microbes that Alvin had sampled from the Mid-Cayman Rise,” he says. “And that’s exactly where we’re heading right now—it feels like everything has come full circle.”