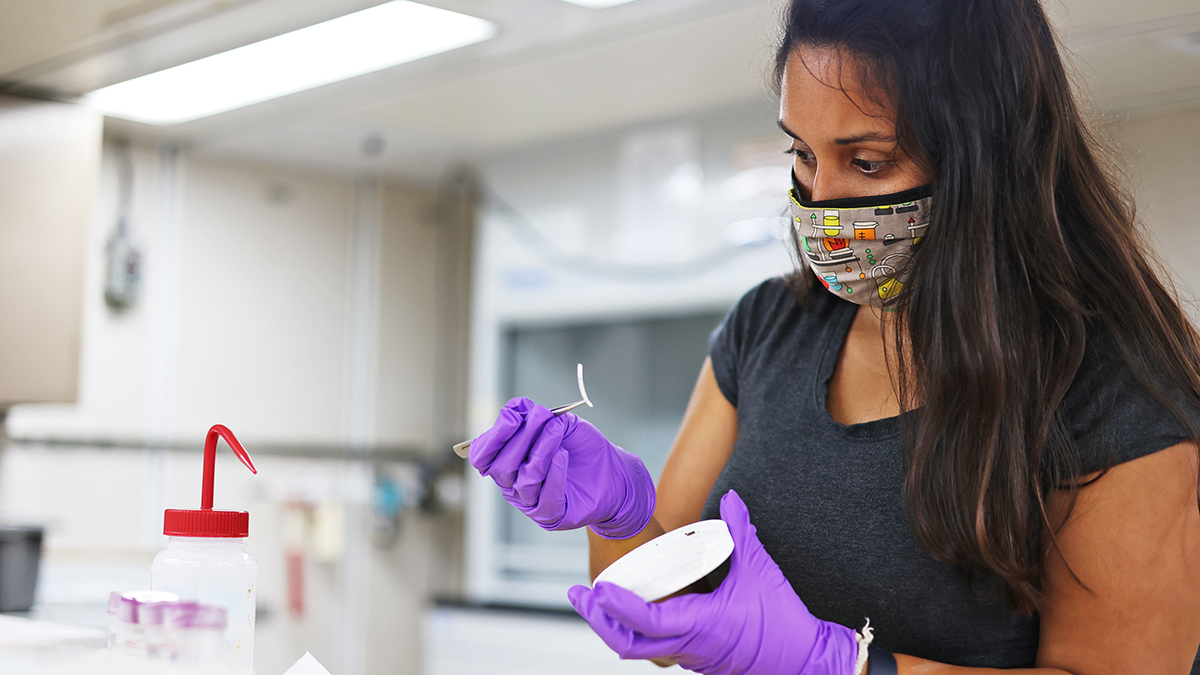 As the Alvin Team runs through their pre-dive checklist, Erin Garza and Erik Cordes pose for a quick photo on the aft deck. It’s just after 6am, but they both look eager to get the day started.

While Cordes, a deep-sea ecologist from Temple University, has completed over 20 dives in Alvin, this will be Garza’s first time in the famous submersible. It’s also her first time joining a research team at sea.

“I never imagined my work would take me to the bottom of the ocean,” she says. “I just started working with marine microbes that degrade plastic. The opportunity to collect samples from such an extreme location is mind-blowing.” 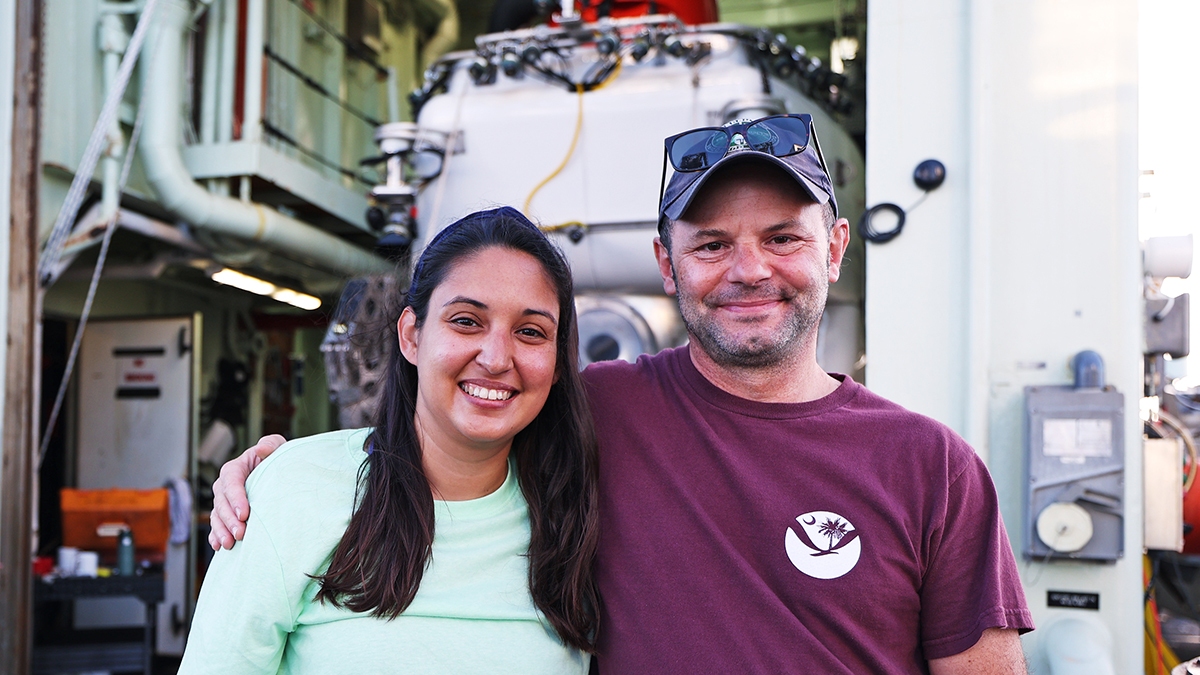 As a genetic engineer, Garza typically spends a lot of time in her lab at the J Craig Venter Institute in La Jolla, California. Now that she is studying the microbiome of ocean plastics, she is excited to work at sea for the first time.

During her dive, Garza is hoping to collect plastic debris from the seafloor.

“It sounds horrible—I hate to see garbage in the ocean,” she says. “But I want to find some because we know it’s there. If we can collect it, we can look for bacteria that might be breaking down plastic.”

On land, researchers have not yet found any organisms that can break down certain types of plastic.

According to Garza, the vast majority of studies on ocean plastics so far involve samples that were collected from surface waters or from trash that washed up onshore.

“There are very few plastics collected from these kinds of depths,” Garza says. “Extremophiles live down there and they do weird things—maybe they are eating the plastic.”

“I grew up watching all these science documentaries about exploring the deep ocean,” she says. “It’s crazy to think I now have the chance to do that too.” 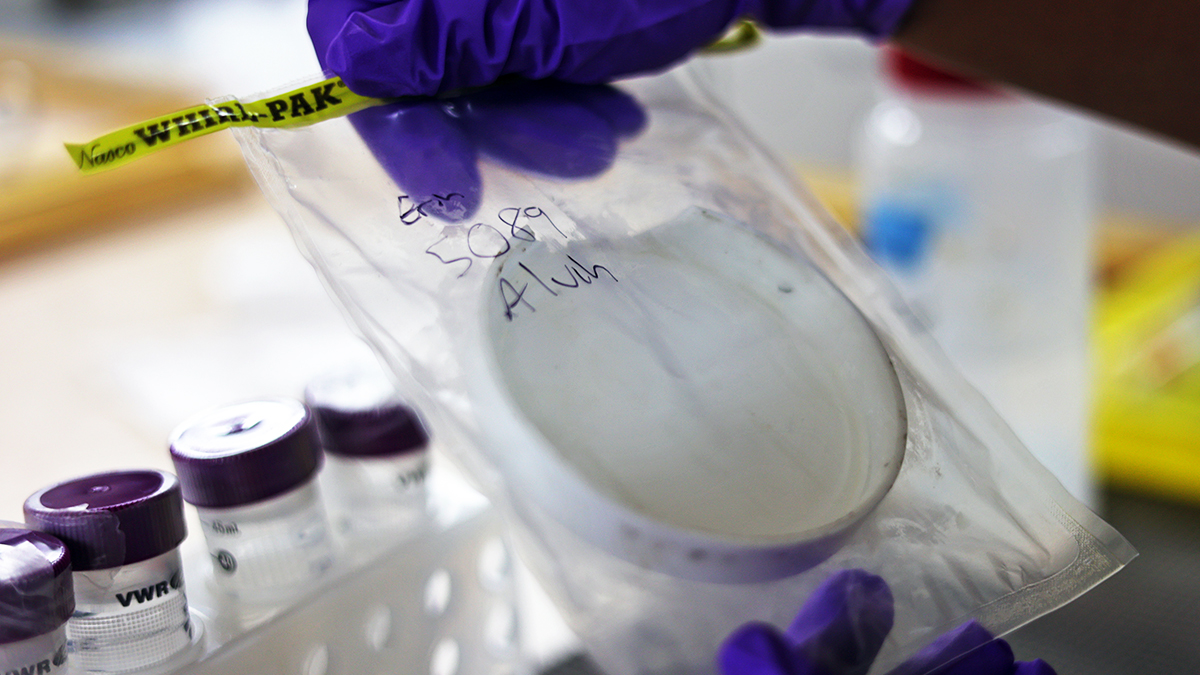 After passing the 3,000 meters, just halfway to the seafloor, Cordes says, “this is the deepest I’ve ever been!”

When they touch down on the seafloor at 6,110 meters, Garza becomes the record-holder for the deepest dive a woman has made on Alvin.

On the seafloor, they find a few scattered pieces of garbage including an old wine bottle, a hair scrunchie, aluminum cans and a ceramic jug. Then they spot a glass jar with a plastic lid.

“If the lid is plastic, I want to collect it,” Garza says. Waters uses one of Alvin’s manipulator arms to grab the whole jar.

Meanwhile, Cordes keeps his eyes peeled for evidence of a cold seep, where fluids issue slowly up through faults in the seafloor, carrying gasses and chemicals like methane and hydrogen sulfide that feed animals, and entire ecosystems.

He doesn’t find a cold seep during the dive, but they do collect a stalked crinoid and a black coral.

“I don’t think it’s a record but it’s definitely one of the deepest black corals ever collected in the Atlantic,” Cordes says.

Cordes has been studying deep seas corals for 25 years, but he’s never collected a sample from this depth before.

“Calcium carbonate naturally dissolves at these depths, which prevents almost all corals that we know of from being able to form their skeletons here,” he says. “But the black corals have figured it out—we just don’t know how they do it.”

Some black corals can survive for thousands of years, but researchers don’t yet have age estimates for specimens living this deep.

“Everything slows down as you go deeper and colder,” Cordes says. “So they could be very old.” 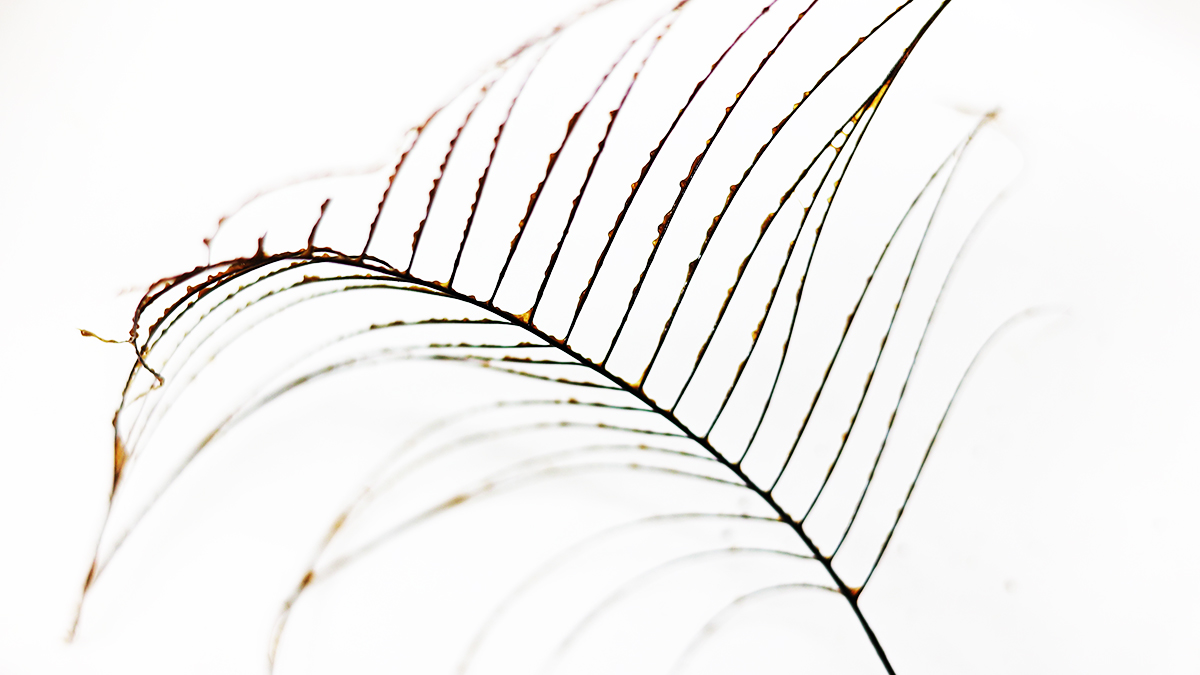 Back in the lab, Cordes will look at age, growth, and possible food sources for these resilient corals.

After returning to Atlantis, Garza tells me about her plan for processing the plastic sample.

“If the plastic is brittle enough, I’ll break it into pieces,” she says.

She will store those plastic pieces in a preservative to save the DNA of any bacteria that are present. She will then take those samples back to her lab to determine what species of microbes are on the plastic and their metabolic activity.

Garza is excited to get her samples back to the lab in California, but if she could be anywhere, she would go down in Alvin again.

“Being on the seafloor was amazing,” she says. “If Alvin didn’t have to return to the ship, I would still be down there.”