Together, Jason and Medea offer wide area survey capabilities with Jason as a precision, multi-sensory imaging and sampling platform. Both are designed to operate to a maximum depth of 6,500 meters (21,385 feet), are transportable, and can be operated from a variety of vessels. The current Jason ROV has conducted over 1,200 dives and the longest dive to date has exceeded 216 hours (9 days).

Medea is connected to the surface ship by a 0.68-inch armored cable with three optical fibers and three electrical conductors. Jason is connected to Medea by a neutrally buoyant tether that is 2.1 centimeters (0.84 inch) in diameter and approximately 70 meters (230 feet) long. Jason is designed for detailed survey and sampling tasks that require a high degree of maneuverability. It weighs 4,990 kilograms (11,000 pounds) in air but is neutrally buoyant at depth. Jason’s closed-loop dynamic positioning system make it a very maneuverable and stable platform.

Both Medea and Jason are superior real-time optical imaging platforms with high-quality cameras and lighting. The vehicles provide illumination for each other, which is uncommon in submersible systems. Medea is configured with three cameras for tether management and terrain identification, as well as visual location of Jason when both are operating.

In single-body mode, Jason attaches directly to a large-diameter (0.842-inch) armored cable specifically designed to deploy and recover the vehicle. Syntactic foam attached to a section of cable close to the vehicle maintain a catenary shape that de-couples ship movements from the vehicle and the cable is also attached to a direct-drive heave-compensated winch and is fairlead through a new, larger knuckle boom over boarding crane.

There are two tool sleds that can be used with the single-body system. One is a science sled with two swing arms and a large front basket, all hydraulically actuated. It also has a rear science bay that can accommodate large science sampling systems.

The second is the heavy-lift sled, which provides Jason with two-ton payload secured with hydraulic latches. This capability is essential to carrying out increasingly common tasks such as observatory installation and maintenance as well as large mooring deployments and cable-laying. Single-body mode also allows for use of an under-vehicle elevator which can carry large quantities of samples and equipment to and from the seafloor, as well as a hydraulic lift winch for smaller packages.

The new Jason control vans have dedicated stations for the operators (pilot, engineer, and navigator) as well as stations for the scientific watch leader, event logger, and data/video recorder plus auxiliary stations for several additional observers. There is also a remote viewing station, with communications to the van, that can be set up elsewhere aboard ship.

The Jason/Medea system can be operated from a variety of support vessels. The support vessel must have dynamic positioning (DP), and sufficient deck space and displacement to accommodate Jason and its systems. In general, Jason can operate from UNOLS Global and Ocean Class ships and other vessels of similar size. 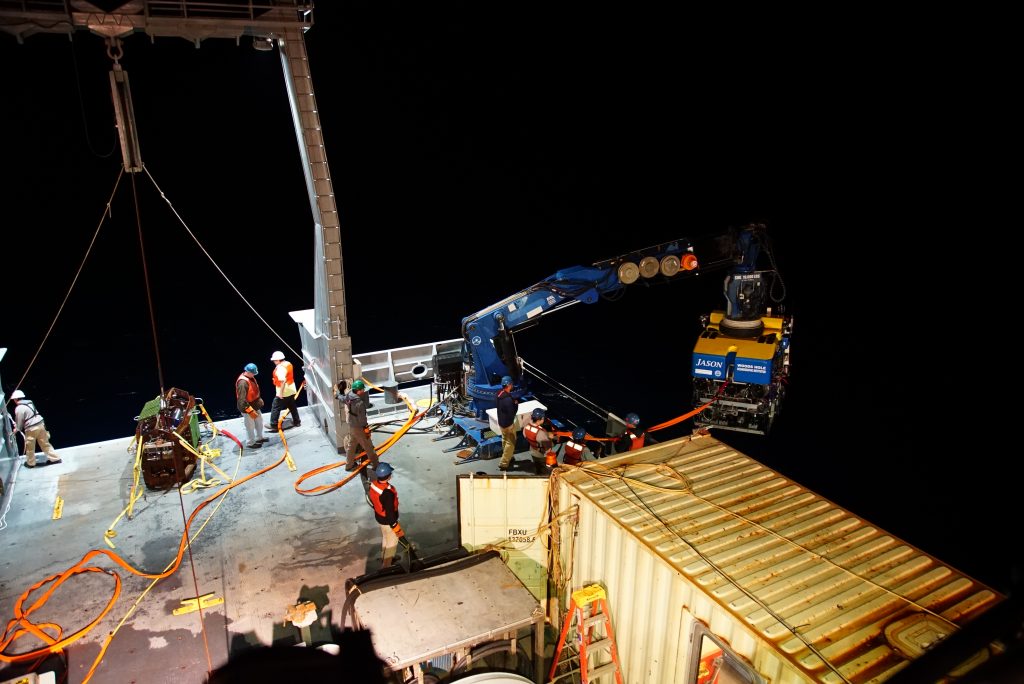 The National Deep Submergence Facility is sponsored by the National Science Foundation, the Office of Naval Research, and the National Oceanic and Atmospheric Administration.