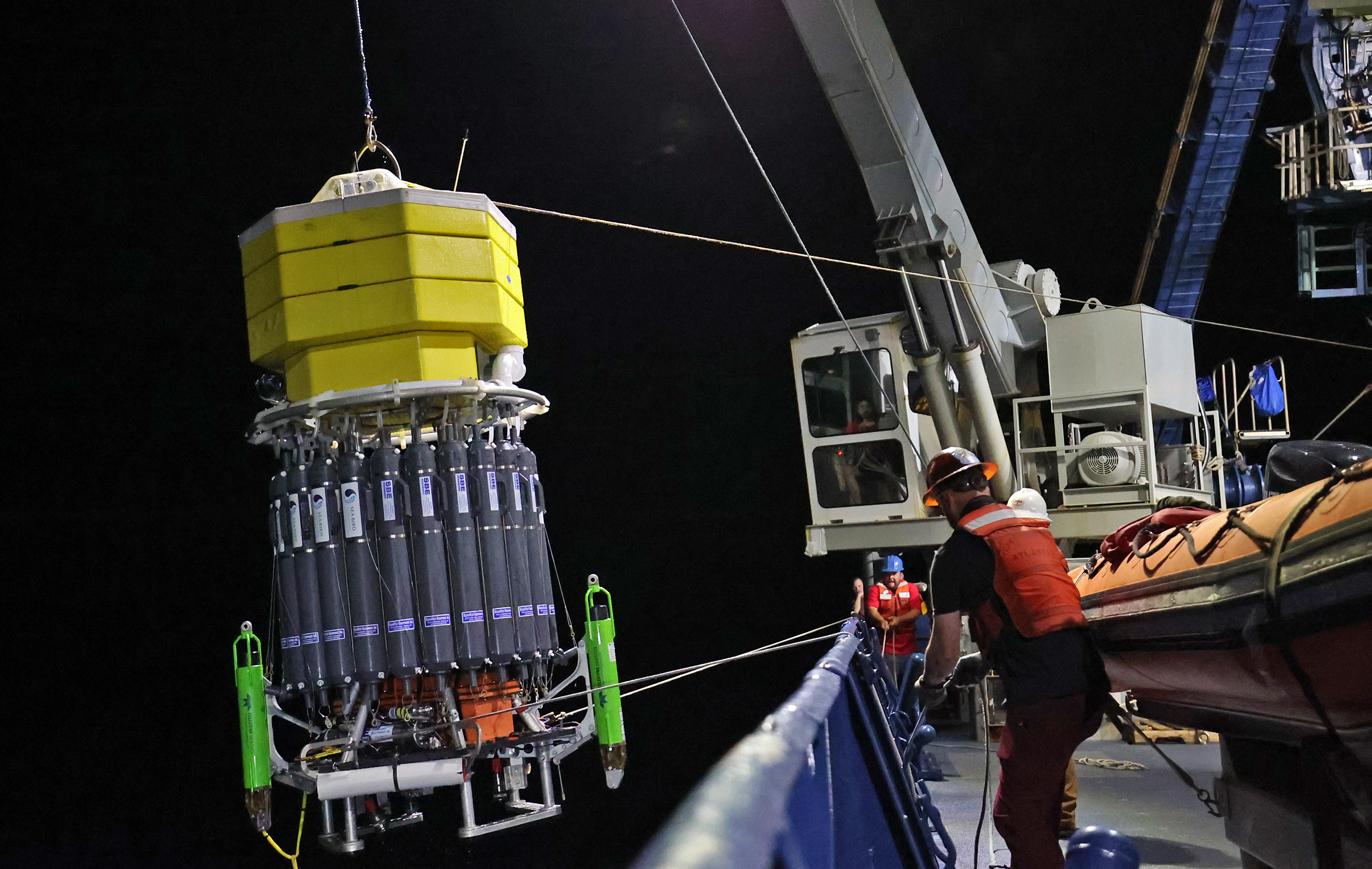 On the back deck of R/V Atlantis, several members of the science team don work vests and hard hats and peer over the starboard rail. A sense of excitement resonates in the group, much like the buzzing energy that accompanies an Alvin recovery.

But Alvin is sitting in the hangar. We’re all here to see the Deep Autonomous Profiler (DAP) come back on board.

Constructed in Chris Roman’s lab at the University of Rhode Island Graduate School of Oceanography, the DAP is a deep-sea lander platform that can travel thousands of meters through the water column, land on the seafloor, then release its weights and rise back up to the surface, operating autonomously for hours. It resembles a traditional CTD (conductivity, temperature, depth) rosette, with a ring of Niskin collection bottles surrounding a central core of sensors, but it lacks a wire connecting it to the ship. Since its assembly in 2018, the DAP has gone to sea five times. This expedition marks its third round of dives in the Puerto Rico Trench. 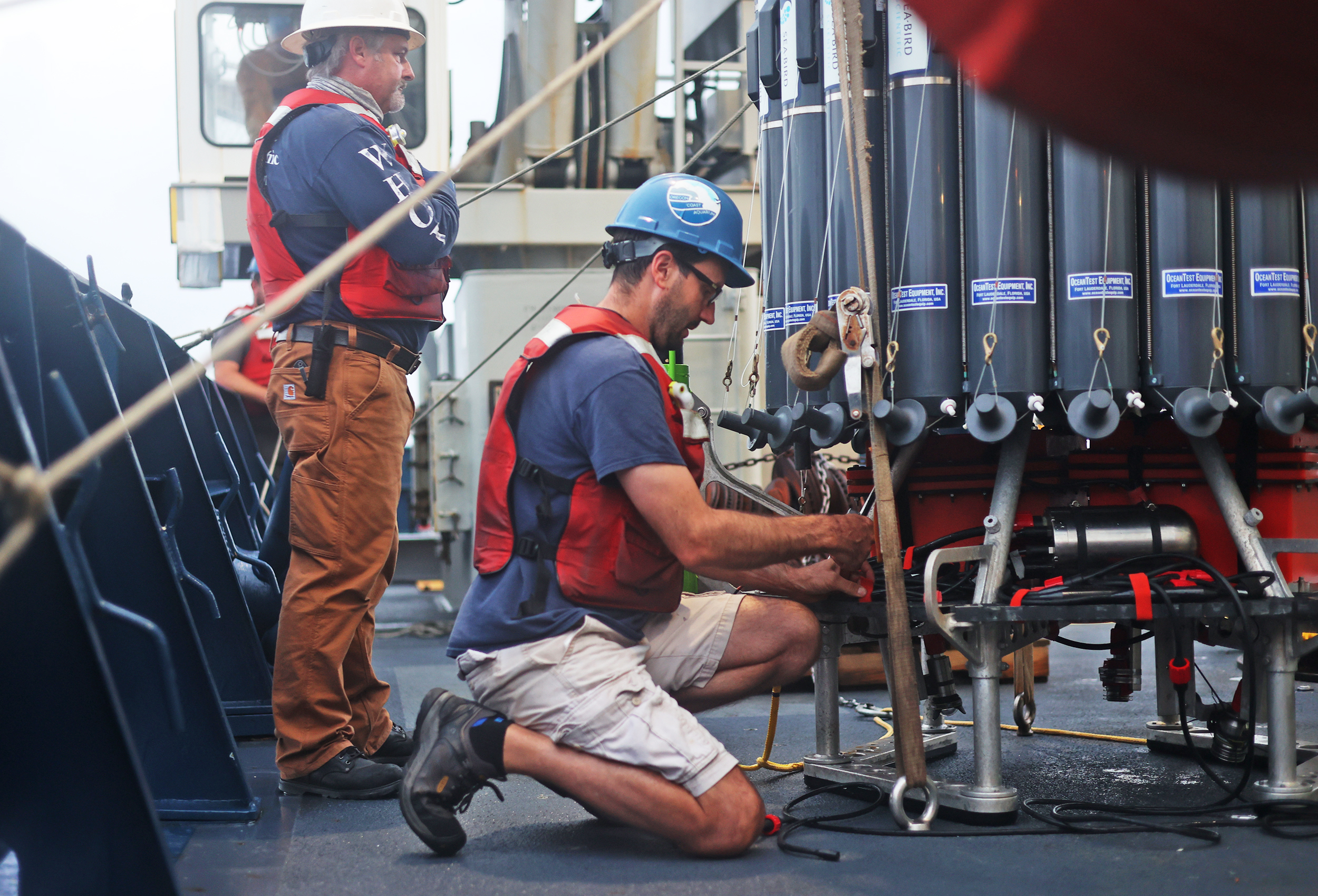 On this particular dive, the DAP went deeper than any other dive of this expedition, touching down on the seafloor at a depth of 7,960 meters.

As it descends, the DAP’s sensors collect measurements (conductivity, pressure, oxygen concentration, and temperature) at a rate of eight times a second.

“Obtaining those measurements allows us to sample very specific zones within the water column, like a thermocline or a certain density of water at a particular depth,” says Phillip Parisi, a graduate student in Chris Roman’s lab.

Once it arrives on the seafloor, the DAP runs calculations based on the measurements it just gathered to determine the depths where it will close its collection bottles on its way back up to the surface. 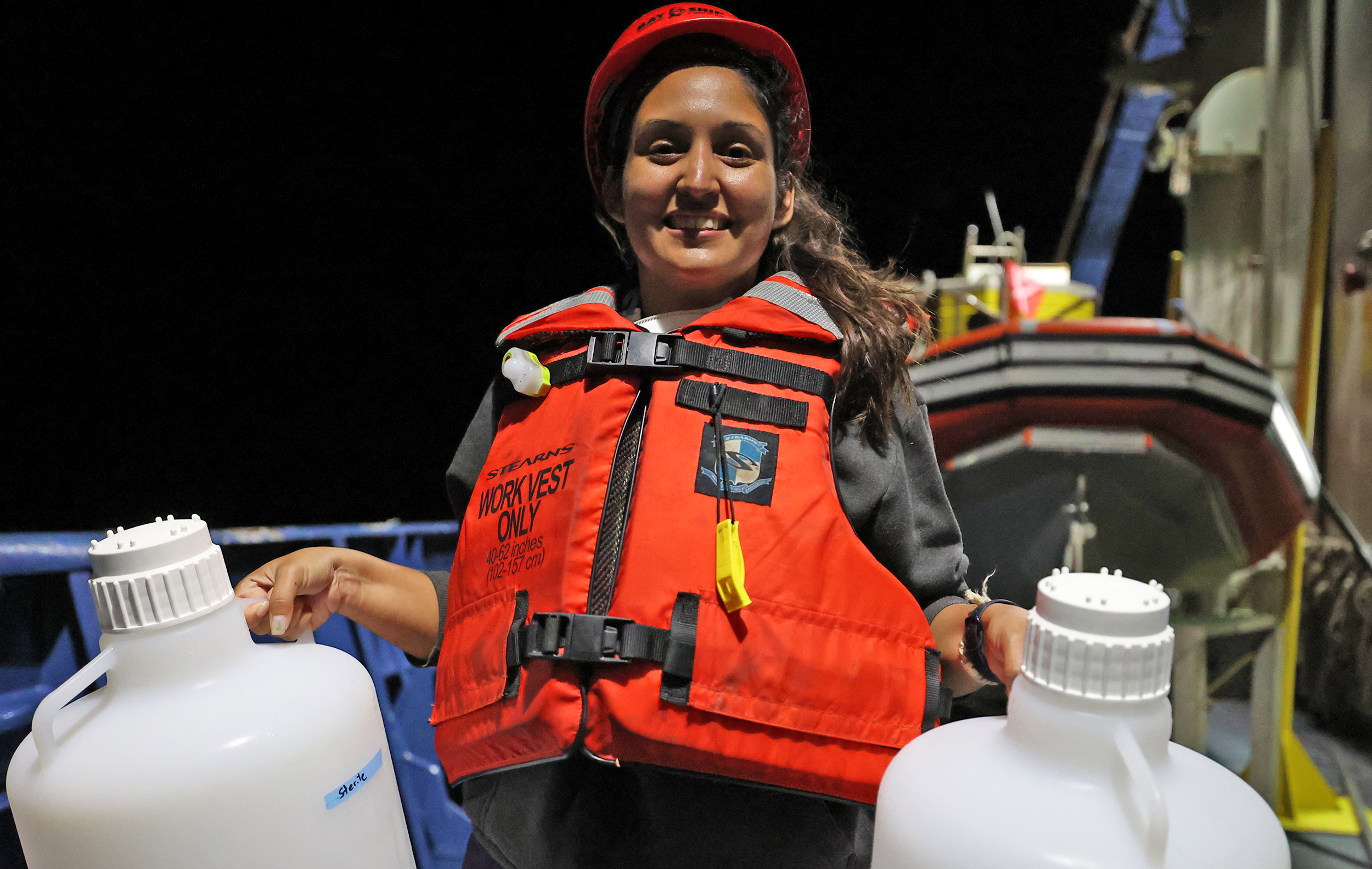 When those bottles arrive back on the deck of R/V Atlantis, scientists like Rosa León Zayas race to collect the water from them.

“Having access to large quantities of water from the deepest parts of the ocean allow us to examine the microbial community and sometimes sample the fauna that is found in the water column,” León Zayas says. “There is no CTD that can do that as efficiently as the DAP can.”

DAP’s untethered, autonomous capabilities also for more efficient use of ship time. Traditional CTD rosette deployments can take several hours, and, because it is connected by a wire, the ship must hold position for the entire duration.

With the DAP, the deck team can deploy it, and then the ship can move to another location (or various locations) to do other work before returning to retrieve the lander several hours, or even days, later.

“The Puerto Rico Trench is 8,400 meters deep, and the Marianas Trench is nearly 11,000. Because there is no wire attached to it, the DAP could reach those depths,” Roman says. “Hanging 11 kilometers of cable from a moving ship is just not possible due to its weight.” 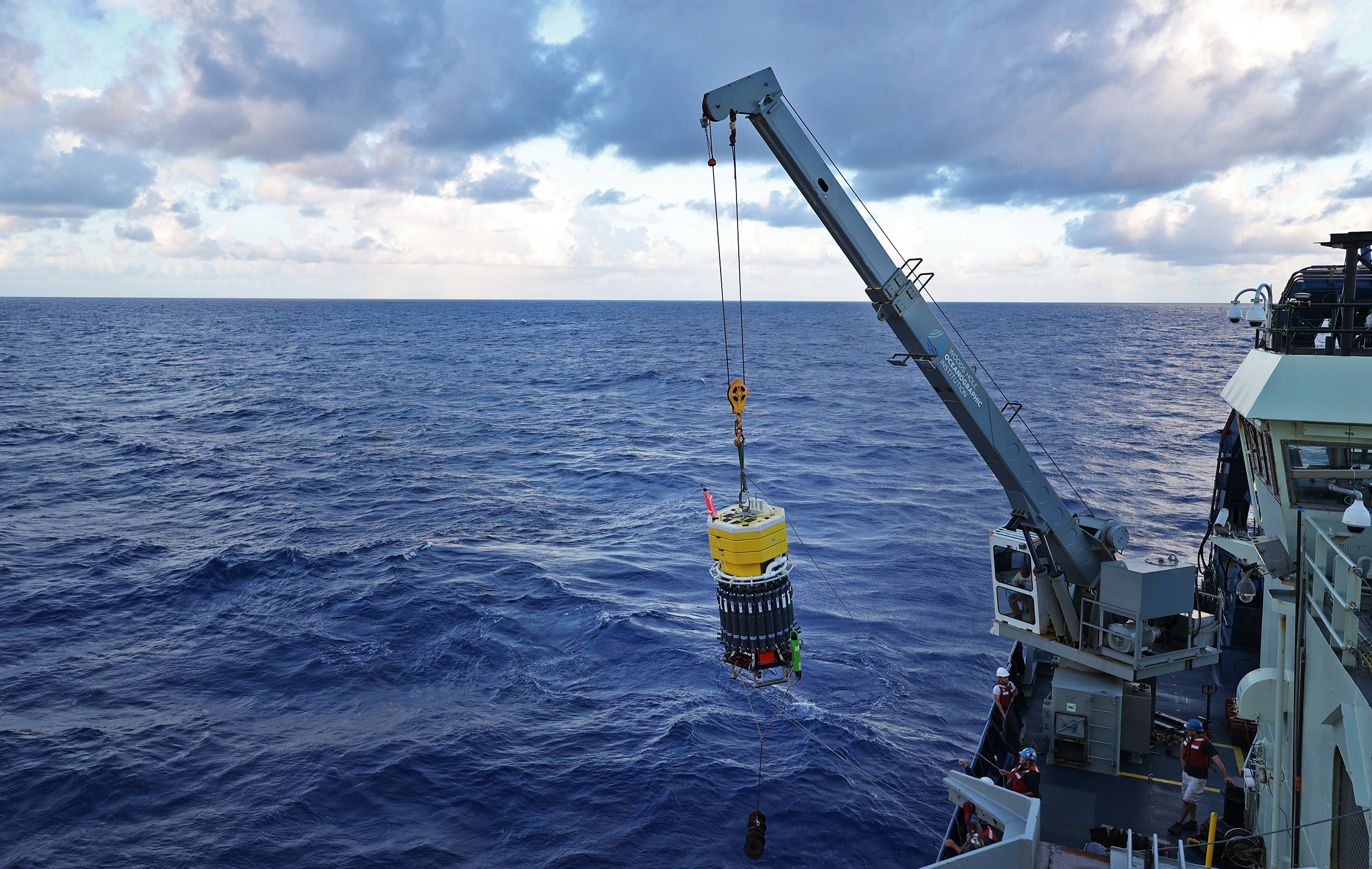 The R/V Atlantis deck team deploys the Deep Sea Autonomous Profiler (DAP) over the starboaard side of the ship in the early morning. (Photo by Marley Parker, ©Woods Hole Oceanographic Institution)

The DAP also contains a variety of other gadgets, including two LED lights and a downward-facing, self-recording HD video camera. To film video, the lights need to be turned on and off in a pattern because leaving them on continuously would drain the profiler’s battery too quickly. Roman sets the lights to repeatedly run for 10 minutes and turn off for 20 minutes, eventually capturing two or three hours of footage each dive.

When the lights are on at the bottom, the camera captures a variety of animal life. On the most recent dives, the weights that sink the DAP to the seafloor have had bait (mackerel) attached to them. When we review the video footage later, we can see several crustaceans nibbling on the bait. A few minutes later, cusk eels swim into the frame and begin feeding on the crustaceans.

“It feels a bit like watching a whole food chain in a place that is hardly ever observed,” Parisi says.

In the future, Roman plans to add more sensors, like environmental DNA (eDNA) samplers, to the DAP.

“We want the DAP to be like a pickup truck for the ocean.” Roman says. “Carrying sensors to the deepest parts of the world’s oceans and bringing back new samples.”