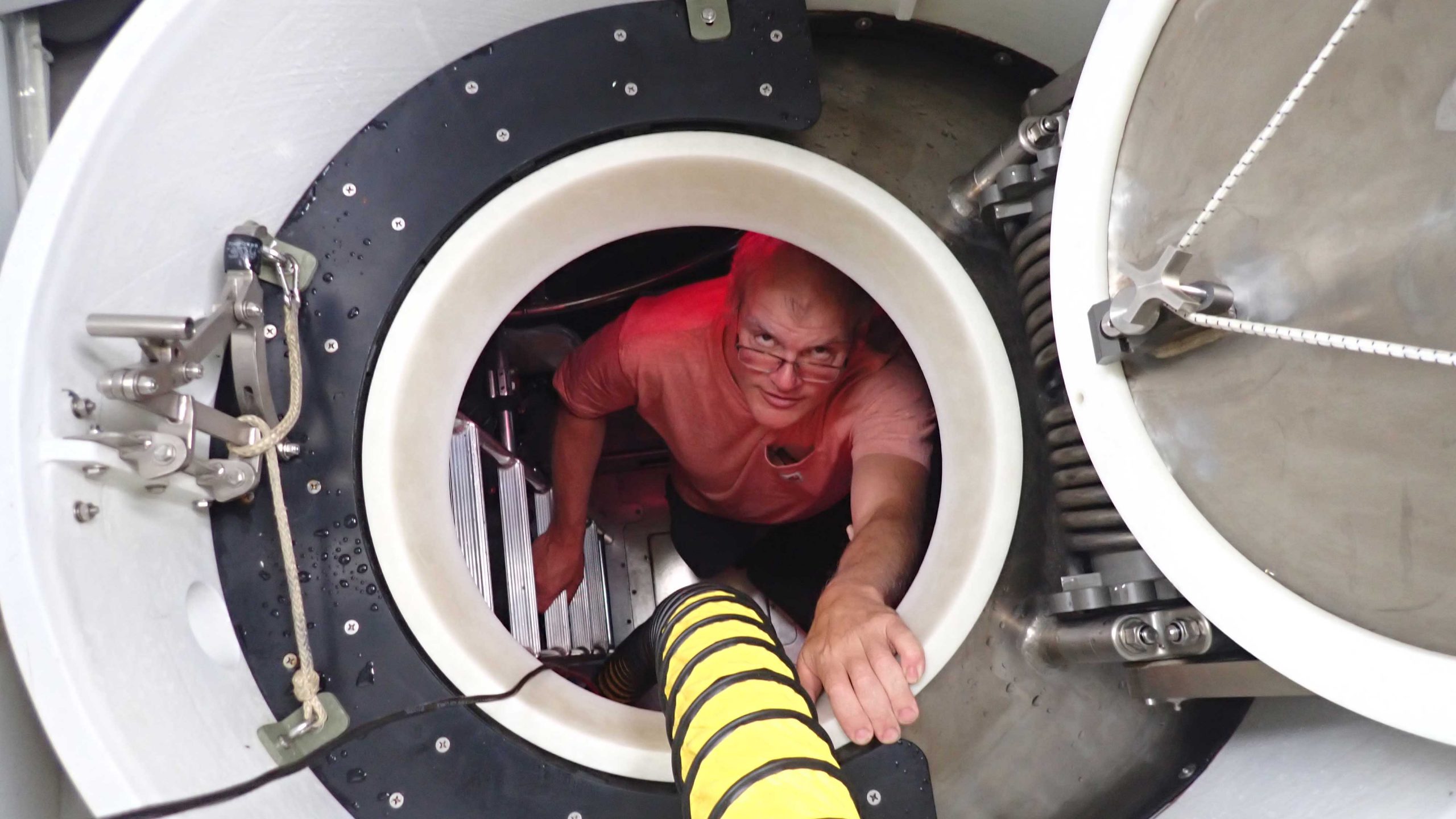 Dive 5085 came up after achieving what was then a record depth for Alvin of 5782 meters. The sub crew decided to come up when they did because they had dived deep enough to put the sub within striking distance of certification depth and also because they also wanted to give the team sufficient time to address some mechanical and electrical problems ahead of the “cert dive.”

Today (NOTE: this post was written on July 20), the sub is not diving so that the team can prepare for its dive tomorrow to a depth of more than 6200 meters—certification depth for future 6500-meter operations. “The goal is to have everything in the best possible working order to finish off sea trials and be ready for science,” said Strickrott.

Not every problem requires the sub to come out of the water, and sometimes having the right combination of people and the right circumstances means that some surprisingly challenging problems are dealt with on-the-fly. Take Dive 5081, for instance. The sudden appearance of a ground in the sub’s computer network put co-pilot and electrical engineer Rick Sanger on the hunt for the origin of the ground while they were descending.

The sub’s operations manual calls for the pilot to check for grounds every 30 minutes and to address any that appear by securing the grounded system—and aborting the dive if the system is considered critical. Normally, during a science dive with a single pilot and two non-technical observers, a ground like the one that confronted Sanger would require the pilot to multi-task operating the sub and troubleshooting the problem with help from engineers at the surface. 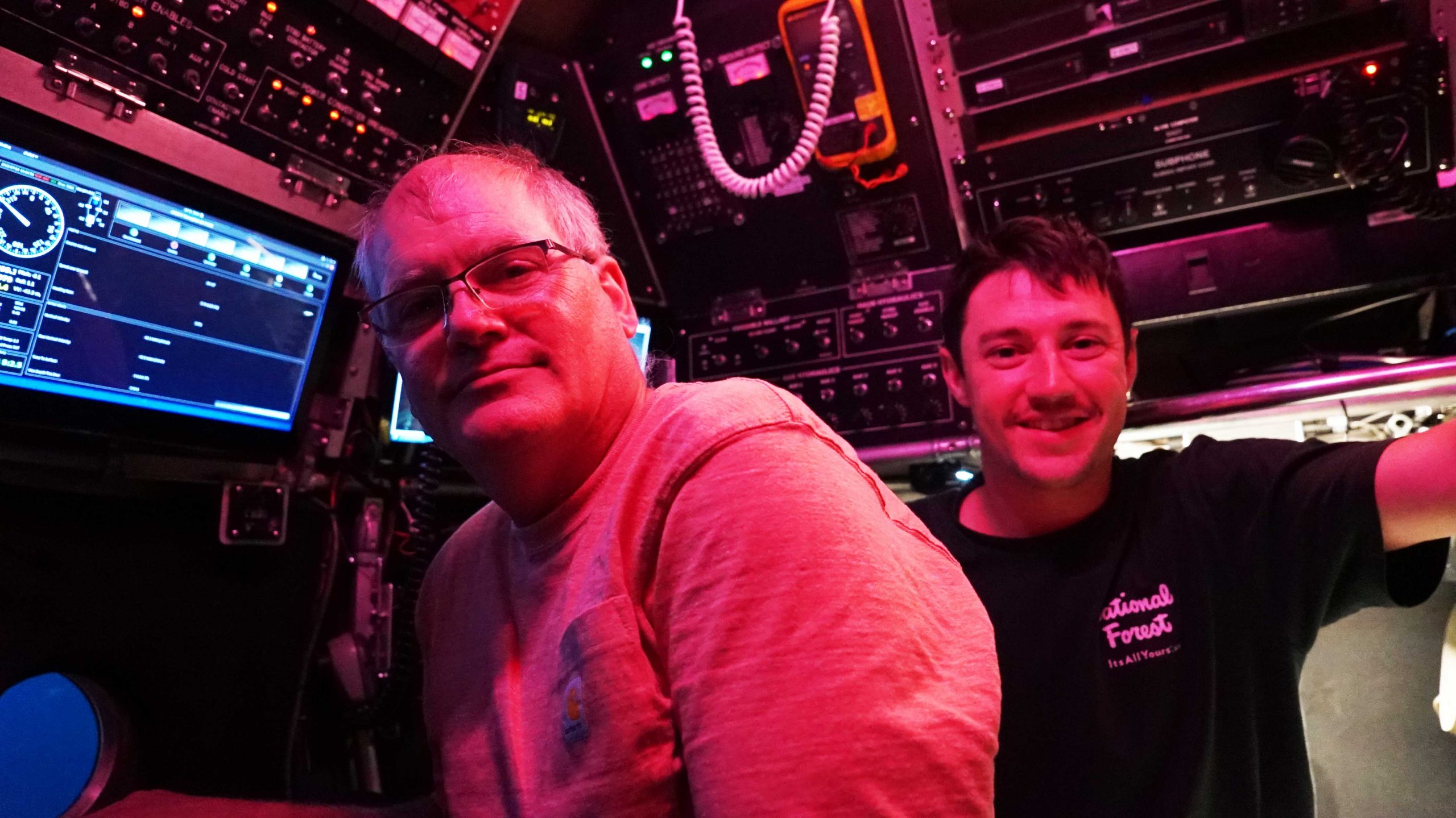 Sanger with first-time diver and Alvin engineer Benen ElShakhs, who got a firsthand look at how to troubleshoot a tricky problem. (Photo by Anthony Tarantino, ©Woods Hole Oceanographic Institution)

Because it was a sea trial dive, however, pilot Anthony Tarantino, was able to continue managing descent while Sanger shut down the systems he suspected of harboring the ground. Sanger then brought them back online one-by-one until he'd isolated the problem: a non-critical imaging system. As a result, they were able to continue the dive, reaching 5170 meters and setting the stage for all of the deeper dives that have followed.

Back at the surface, the root cause took a little more sleuthing, but again, Sanger and the electrical team were able to get to the bottom of things. After the sub had rolled out on deck that morning, the dive had been delayed due to a mechanical problem on the ship. While the crew addressed that problem, the humid, tropical air filled the personnel sphere that, when it was cooled by the surrounding seawater during the dive, condensed and may have ended up on a network cable, causing the ground.

The imaging system makes up one of two computer networks inside the sub, the other being the command-and-control system, both connected by a shielded network cable. Because that particular type of cable has metal connectors at either end, the ground was able to propagate throughout both networks. Once that had been identified, it was a simple matter of replacing the cable with an unshielded cable, which has plastic connectors, to keep similar problems isolated in the future. In addition, during the port stop in San Juan, the team placed an order for buckets of dehumidifying agent to use inside the sphere before the hatch is sealed in case a future delay creates similar conditions. 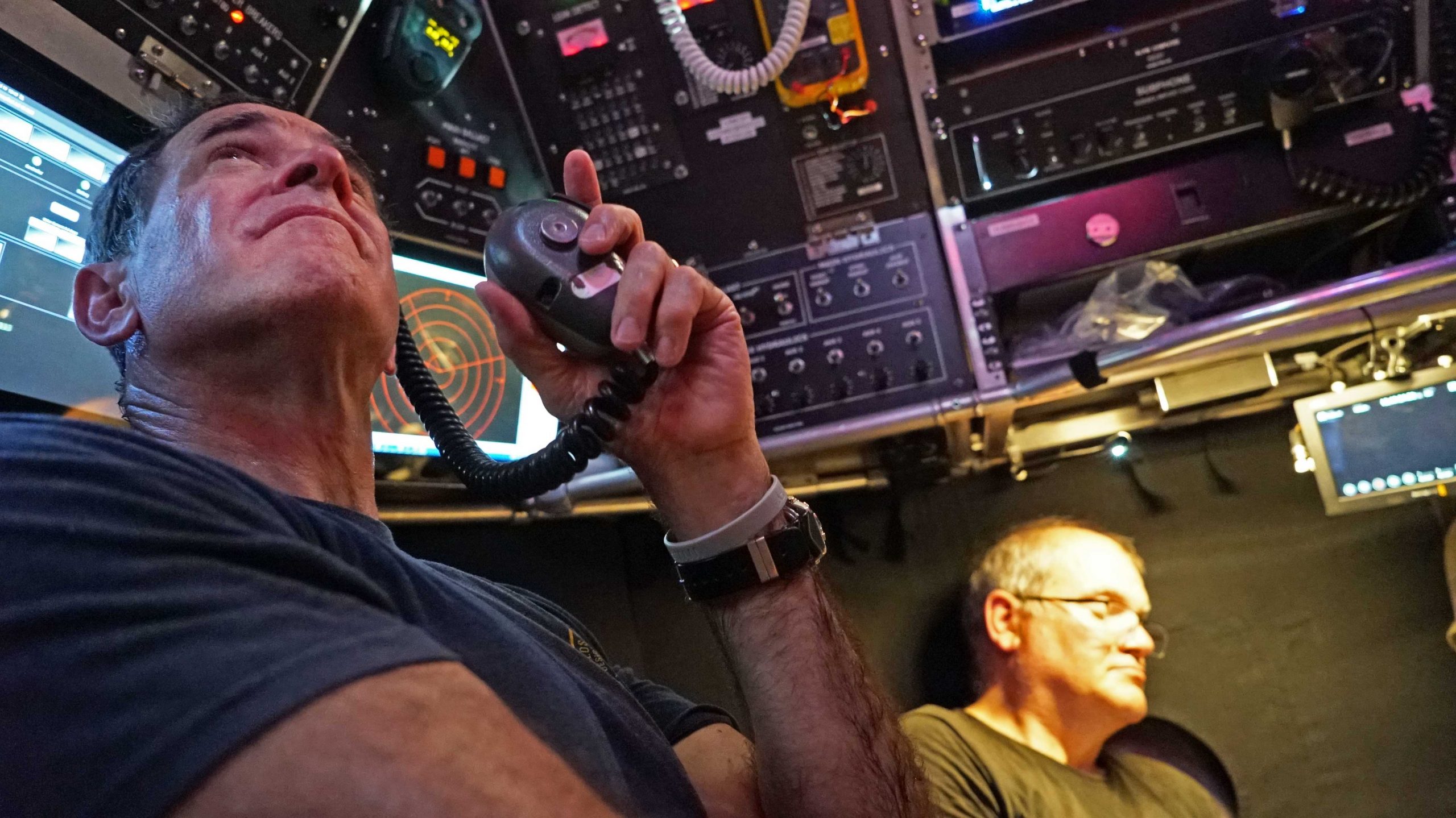 Strickrott and Sanger on Dive 5085, which was able to reach 5782 meters in part because of Sanger's efforts on Dive 5081. (Photo by Cmdr. David McGlone, NAVSEA; ©Woods Hole Oceanographic Institution)

For Strickrott, the way Dive 5085 unfolded underscored the importance of a shakedown period such as the one sea trials offers, which gives the opportunity to put the right combination of people inside during each dive.

“We wouldn’t have been able to do what Rick and Anthony did if this was a regular science mission,” he said. “But it’s not a regular mission. This is sea trials. We’re supposed to be seeing issues like this crop up now so that we can put them to bed for good.”