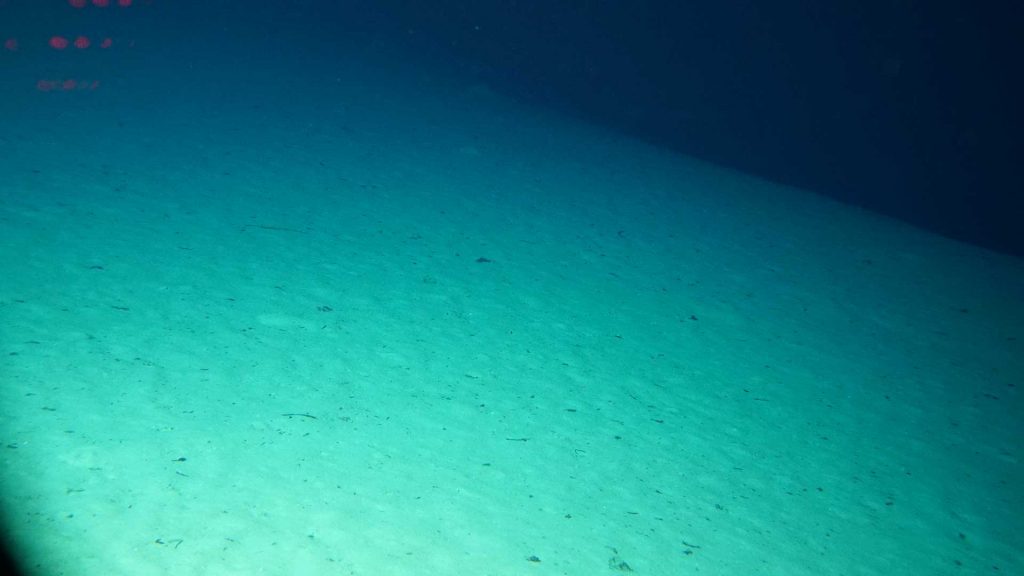 It may seem uninteresting, but this is what most of the surface of the planet looks like. (Photo by Ken Kostel, ©Woods Hole Oceanographic Institution) 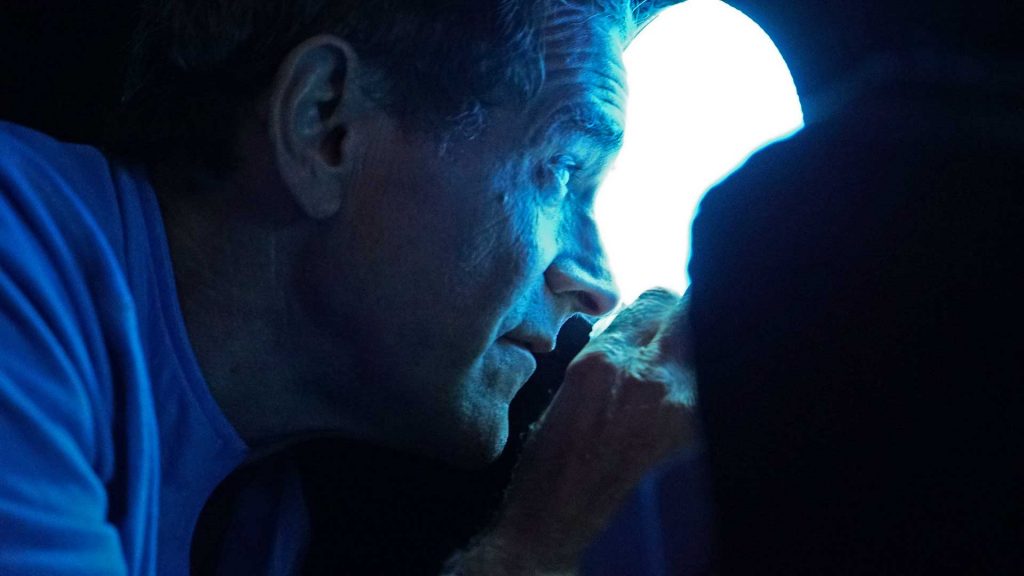 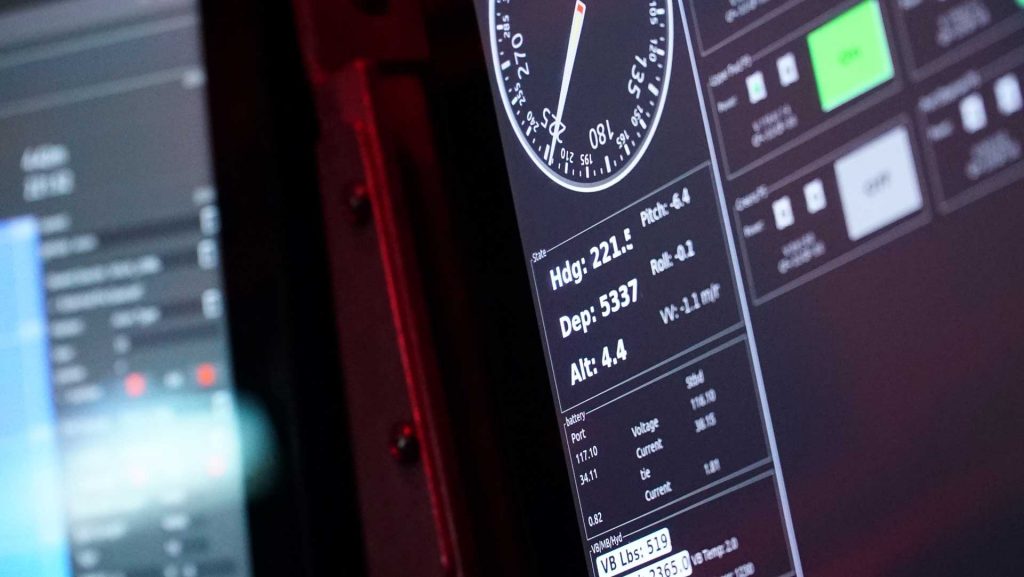 A moment after the depth gauge read our maximum of 5338 meters for the dive. (Photo by Ken Kostel, ©Woods Hole Oceanographic Institution) 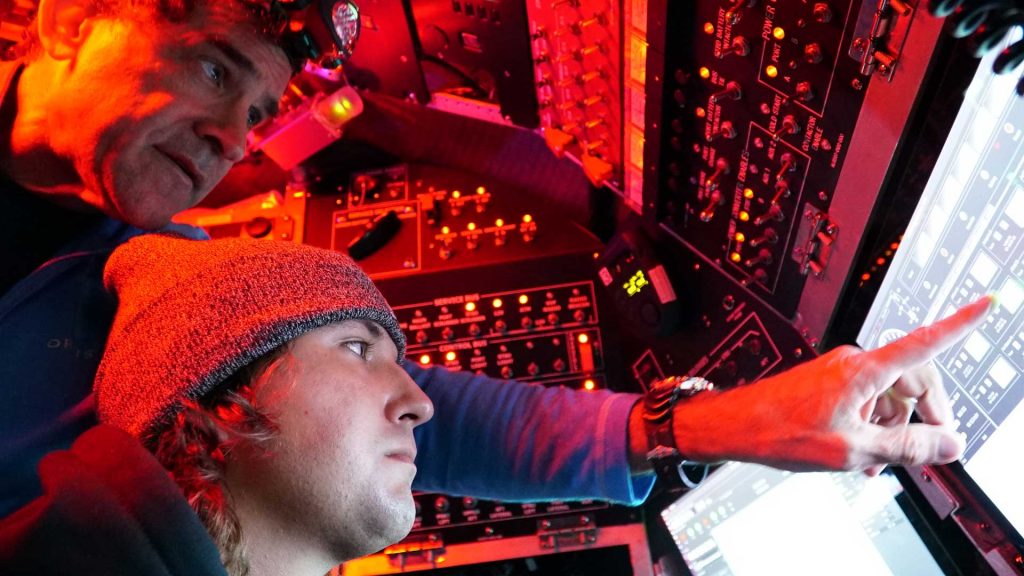 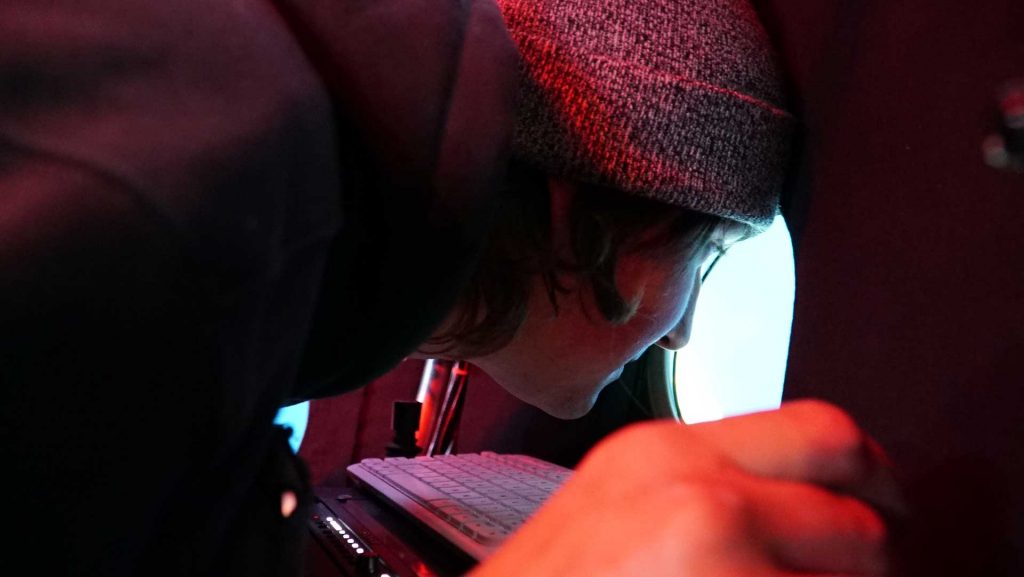 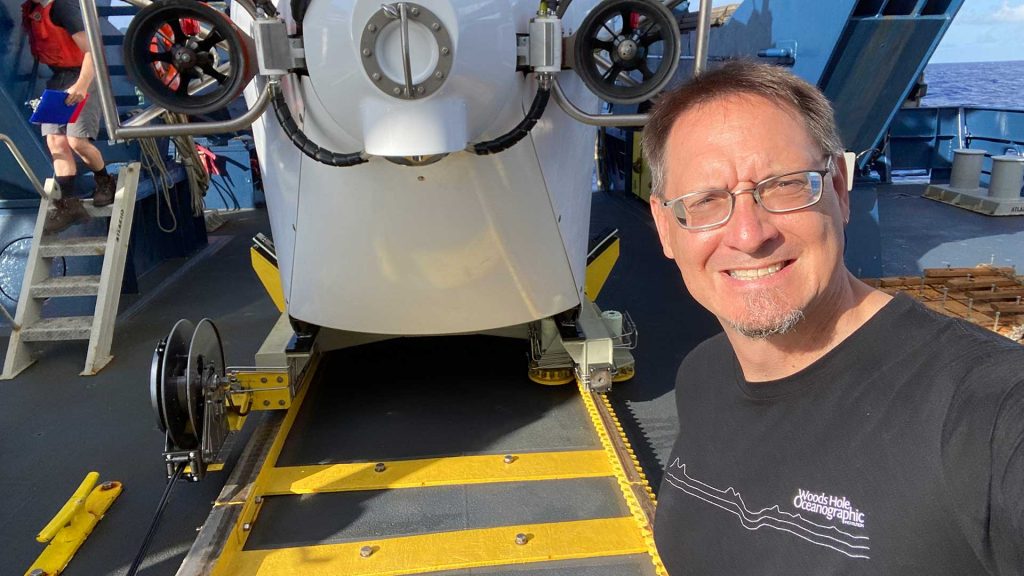 The face of someone about to have the ride of a lifetime. (Photo by Ken Kostel, ©Woods Hole Oceanographic Institution)

I don’t usually do this; I don’t usually write for WHOI in the first person. Because what I have to say is not about me, it’s about the scientists and engineers, their work, and what they help us learn about the ocean. That’s what matters day-to-day and so that’s what I write about as objectively as possible. Occasionally I’ll feel brave and throw in a “we” here and there.

But today is different. Almost eleven years to the day after walking onto Atlantis for the first time to cover an Alvin cruise in the Gulf of Mexico, I made my first dive in the sub.

My bad luck with being selected to dive in the years since then had become sort of a running joke. Anytime someone asked me if I’d ever dived, I’d reply that I was the person the chief scientist would turn to at the end of an expedition, with the ship’s engines spooling up and the bow pointed toward our demobilization port, and say, “If we’d had one more dive, you would have gone down.” There’s more truth to that than not. But while I’ve born the disappointment with good humor (again, it’s not about me), not being able to dive always been a little bit of a sore spot that I’ve salved with other work. I wrote, I photographed, I interviewed, I put in late nights and early mornings. As a result, I have hundreds, if not thousands of images (some good, most mediocre) of everything that happens on the ship and in the water to get Alvin down to the seafloor and back each day. But the period in between deployment and recovery has always been a story for someone else tell.

Today, the choreographed intricacy and intense focus of launch and recovery were for others to watch and for me to experience from inside the sub. Today, when the pilot completed his checks and called up to the Launch Controller to load the sub, I made the climb to the top of the stairs leading to Alvin's sail. And I watched from inside the personnel sphere as the hatched closed above me.

Dozens of launches told me what to expect: the hoist and boom out over the water, the preparations by our swimmers to clear lines and confirm our vent valves, the call for final checks and request for permission to dive. But there was something I was completely unprepared for. For nearly 11 years, I’ve seen Alvin as a hulking, 43,000-pound machine. Don’t get me wrong, it’s a wonderful machine, but it’s also something so massive that it requires a 274-foot ship with 24 crew and a skilled team of engineers to move it around the world and to accomplish whatever science might call on it to do. I wasn’t prepared for this sumo wrestler to transform into a ballerina the instant it submerged.

As soon as there was water over its sail, it was as if Alvin breathed a sigh of relief, shook off its bulk and danced. It actually danced. And when we arrived on the seafloor, yes I was amazed to see the view in three dimensions as everyone told me I would be, but at some point I sat back from the porthole and laughed out loud, struck with the joy that Alvin radiated to be home again doing what it was meant to do.

This is a blog post, not a New Yorker essay, so I’ll spare you more prose and go back to being a correspondent for a moment. Bruce, Nick, and I were fortunate to be on Alvin’s deepest dive ever. We settled on the seafloor at the end of the day and the depth readout clicked over to 5338 meters. We didn’t see much because we were on a mission to get Alvin deep—5000 meters at least, deeper if possible—so we flew high over the seafloor and, at 1 knot, relatively fast for Alvin. We surpassed the former and met the latter goal, so the dive was objectively a success. But at the surface, as you may have read elsewhere, the team found a problem with Alvin’s syntactic foam that will put further dives on hold while the team sorts things out.

However, this fact does not detract from what is a remarkable achievement. Alvin is in an experimental phase, diving places it has never gone before, and it did so with ease and grace. It also underscores that what this team does is inherently difficult. They may make Alvin dives look easy and successful dives to the deep seafloor a matter of course, but as I once wrote during another expedition, the ocean does not give up its secrets easily. It’s a challenge—a solvable one, but a monumental challenge nonetheless.

What comes next will require long hours and considerable time and effort on the part of a talented and (temporarily) dispirited team. But I have no doubt they will make it right because that is what they do—they solve problems and make difficult tasks appear routine. I’m already seeing signs that they are turning to the challenge at hand, proposing solutions, and working through alternatives. I also have no doubt that Alvin will soon be back dancing across the seafloor because that, too, is what it was meant to do.