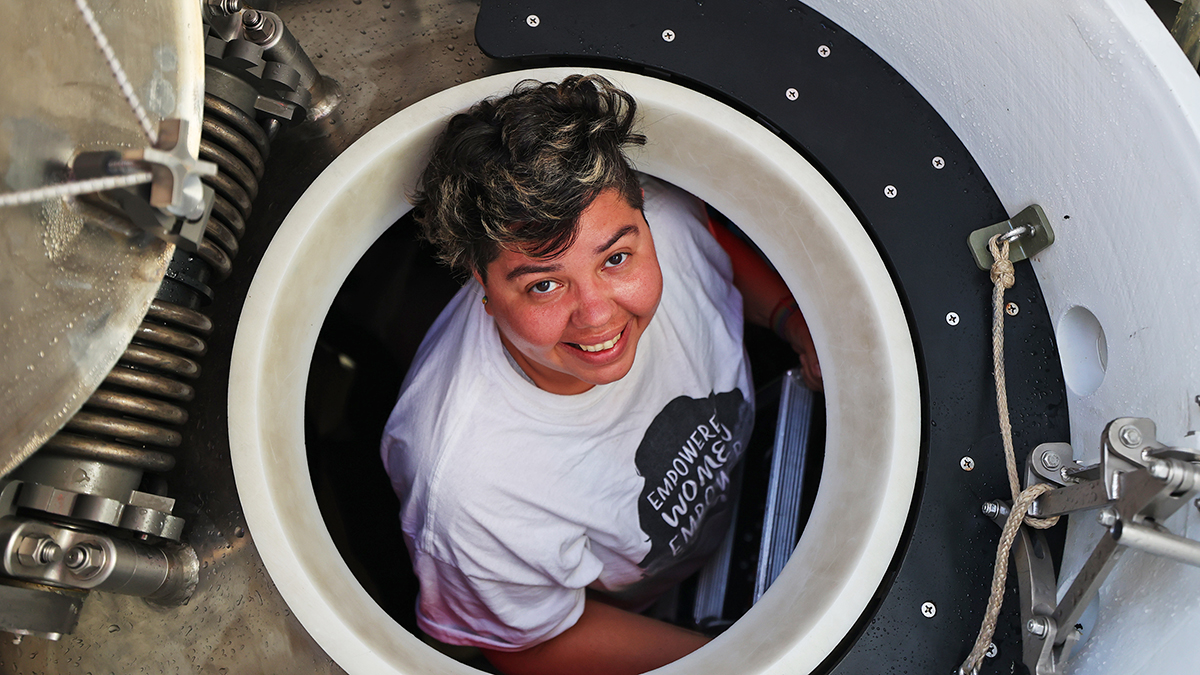 After breakfast, chief scientist Adam Soule and Rosa León Zayas sit together in the ship’s main lab, talking about their plans for work today – at the bottom of the ocean.

“Let's keep our eyes out for light-colored materials and organic shapes,” Soule says. “Those could be evidence of seeps.”

León Zayas, a native of Puerto Rico, nods her head in agreement. This is her first dive in Alvin—and it happens to be just over 100 miles from where she grew up.

“My family is from a small town in the center of the island, about 40 minutes away from any coast,” she says. “We went to the beach a few times a year.”

It wasn’t until college that León Zayas realized she could make a career out of studying the ocean. Her research focuses on the composition and metabolic potential of microbial communities in marine environments, especially deep ocean trenches.

During other expeditions at sea, León Zayas and her colleagues have utilized lander platforms to collect samples from the seafloor.

“It’s very difficult to get to ultra-deep trenches,” she says. “Going in Alvin to do that kind of science has never been in the realm of possibility for me because Alvin couldn’t go that deep,” León Zayas says. “But now, because of the new certification, we can reach some of the shallower sites that I study. It’s like a revolution.” 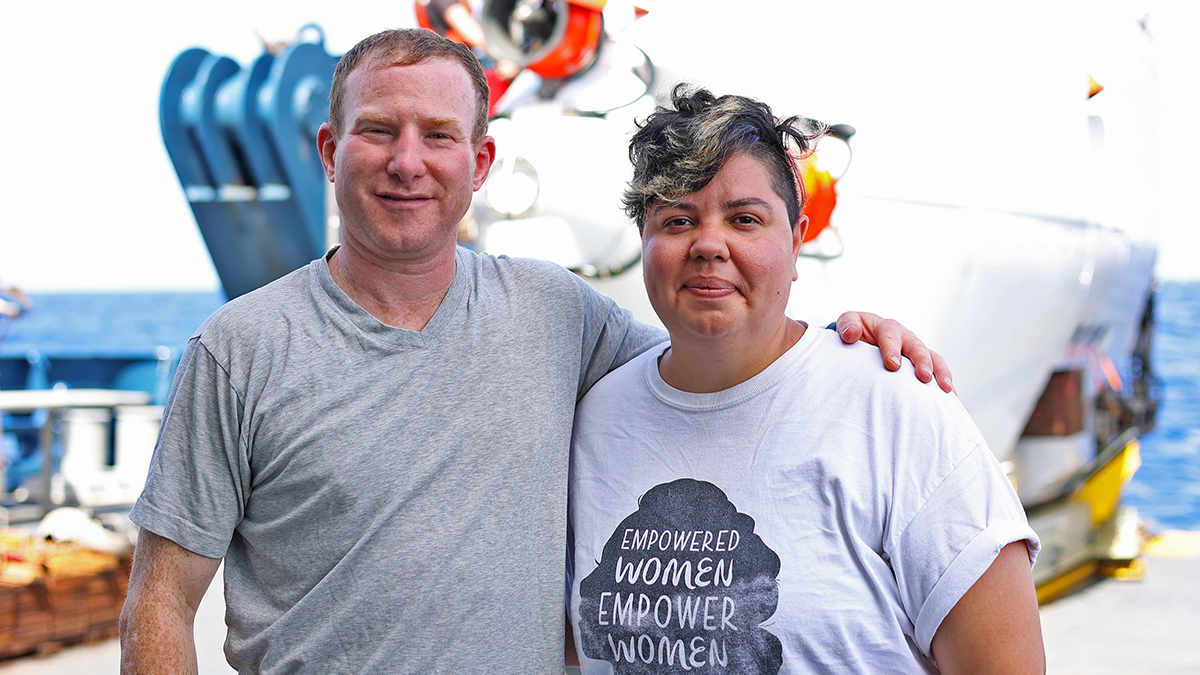 I ask León Zayas how she’s feeling, and a broad smile spreads across her face. “It’s a completely new experience so I feel a healthy combination of excited and terrified,” she says.

When León Zayas chats with Alvin Group Leader Bruce Strickrott, he tells her to think about the dive like a long road trip.

“I’ve moved across the country many times because of academia,” she says. “I usually do pretty well when I spend eight hours in a vehicle, so I think it’ll be great!”

For Soule, León Zayas, and Strickrott, their road trip to the bottom of the ocean begins at 10:00 a.m.

After a two-hour descent, Alvin touches down onto soft sediment.

“It seemed a bit like landing on the moon,” León Zayas says. “After the sub touched the bottom, we were immediately surrounded by a big cloud of sediments.” 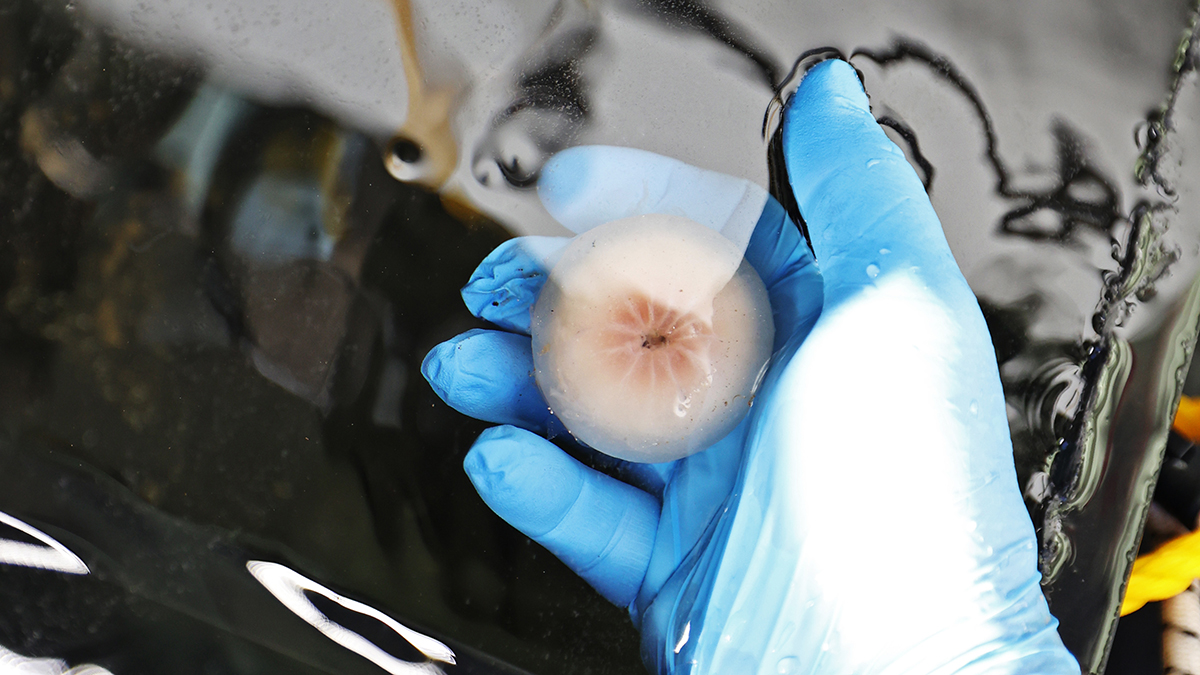 Over the next four hours, they collect a biological sample, a rock sample, and two sediment samples, and they record everything they observe. Soule also takes a few moments to interview León Zayas (in both English and Spanish) about her experience working in the sub.

When Alvin returns around 5:30 p.m., the entire science team gathers on the aft deck to congratulate León Zayas and Soule on a successful and historic dive. Cheers and high fives are exchanged all around.

Soule, who has completed over 20 dives in Alvin, says this dive felt like every other one in that it went by too quickly.

“We were working hard the entire time to see as much as we could, and record everything, but also aware that this was a big deal,” he says. “It was the first science dive the sub has had at hadal depths. It was really gratifying to be part of it.”

For León Zayas, the dive was exhilarating and enlightening—as well as personal.

“Being able to study the ocean in Puerto Rico is a huge privilege,” she says. “This experience is an opportunity to give back to the incredible place I grew up in. I just wish more people on the island could have the opportunity to study the deep ocean.”