Riding in an observer seat for the last three consecutive Alvin dives were engineers of different kinds: an Alvin mechanical engineer, an Alvin engineering technician, and a WHOI software engineer who is on board for sea trials. Here are their dive stories. 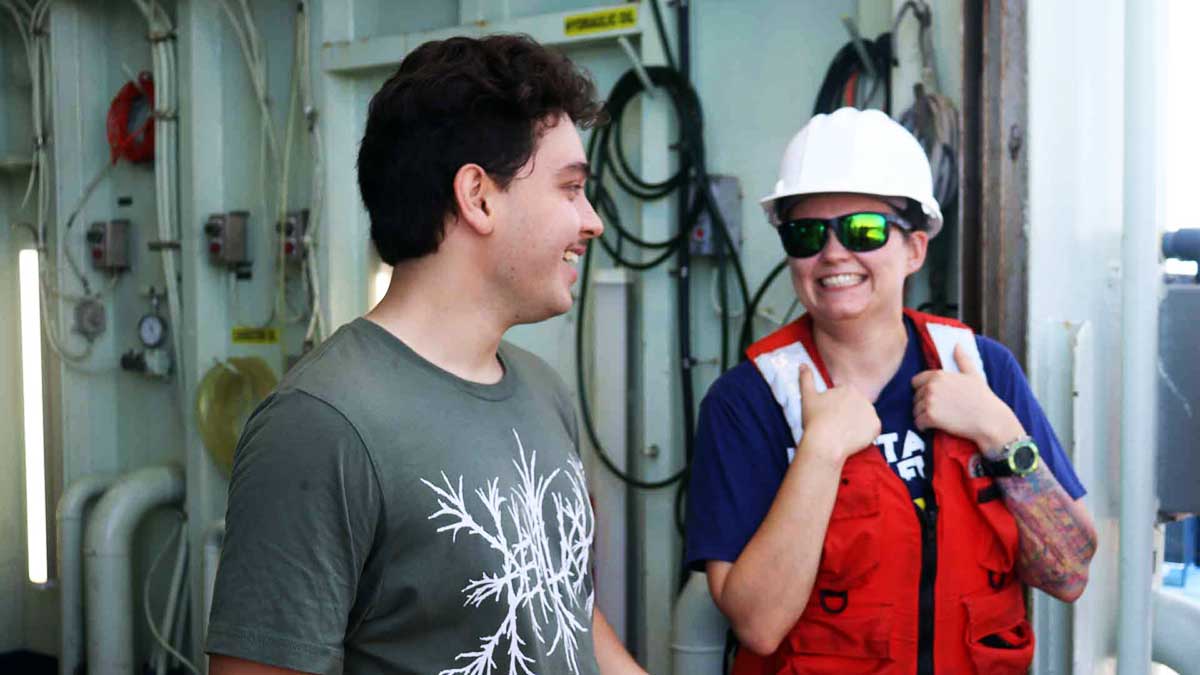 Ellis has been working with the Alvin Team intermittently over the last four years, starting as a MATE (Marine Advanced Technology Education) intern in 2018, returning to do another internship with NDSF during the overhaul in summer of 2020, and now—after his graduation—as a full-time WHOI employee. His only previous dive, last fall in Bermuda during the sub’s initial sea trials, was to 100 meters. This was his first time taking the sub into deep water.

“The first thing that surprised me was how comfortable Alvin got once we were in the water,” Ellis said. On his Bermuda dive, the sub didn’t go deep enough to cool down and the sphere stayed warm and humid the whole time. “Once we were submerged the humidity went down, it got cooler, to a nice 68°F.”

It’s possible Ellis noticed this so precisely because he was assisting with atmosphere checks on the way down, recording temperature, humidity, depth and internal sphere pressure. 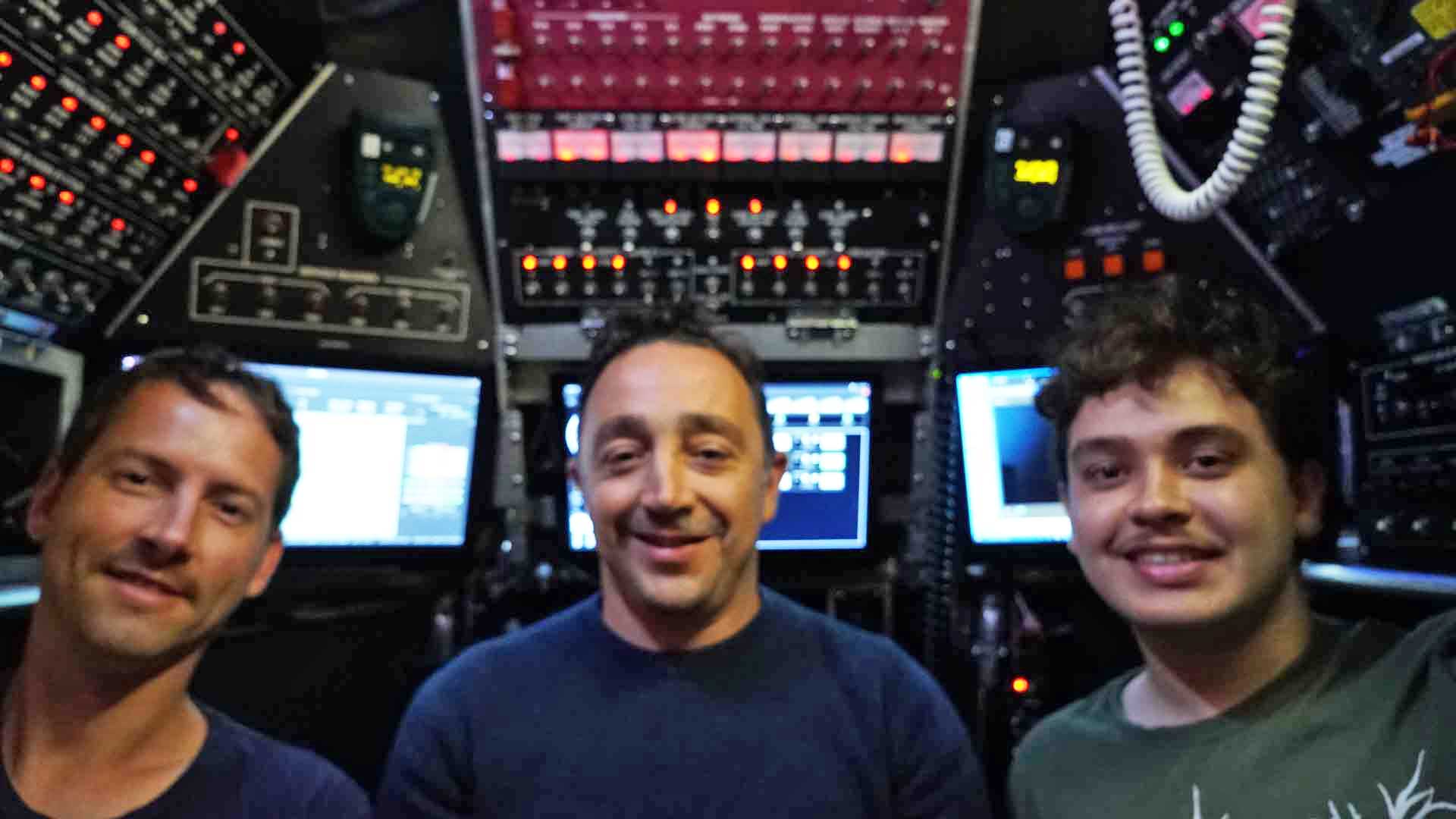 “I was also surprised by how dark it got,” Ellis added. “It went really quickly from the nice crystal blue on the surface, to the deep blue, to dark—like in a cavern or if you’re underground.”

At the bottom, the landscape was striking. “We were on a ledge and everything was still and faded into abyssal darkness below us,” Ellis said. “It was almost untouched, and there was nothing moving. But it was also eerie, because you don’t know what is lurking down below. When you’re down there, you see everything with your lights on, everything is illuminated. But even with all the colors that exist there, all of this is in complete darkness until someone comes down there with a light.” 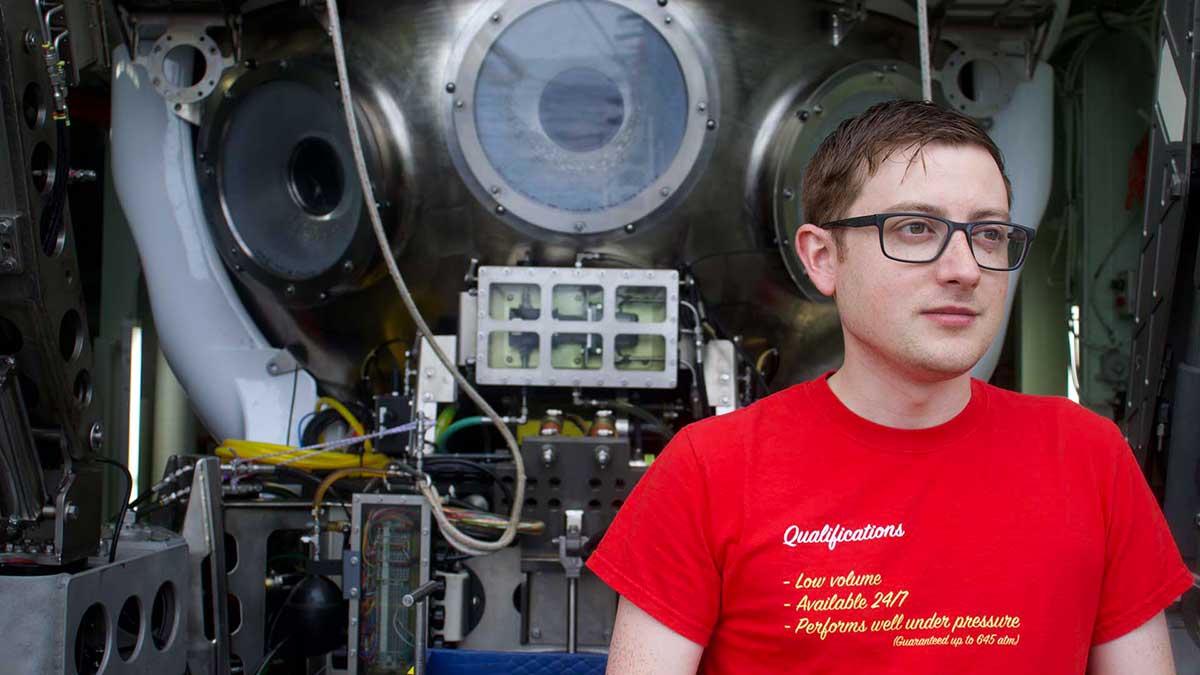 Ryan Govostes with a shirt highlighting reasons why he should dive in Alvin. Hannah Piecuch ©Woods Hole Oceanographic Institution

Govostes works closely with the NDSF data team to make sure that the software running in Alvin and on Atlantis are collecting the scientific data. This is work he is doing across NDSF vehicles to help make all the data that is collected useable for scientists. While it was not his first sea trials, this was his first dive.

On this dive the pilot and co-pilot were troubleshooting the hydraulics system. Minutes before launch, Govostes helped get a video feed from a camera strategically pointed into on the inner workings of the hydraulic system to display on a monitor inside the sphere.

Diving in the sub while a whole system was under observation for a potential issue made for a unique experience. “I was a little hesitant at first,” Govostes said. “But after the pre-dive orientation, I understood more about the multiple layers of safety in Alvin. I felt confident that we would be able to go in, evaluate the system, and come back safely.”

The video feed allowed the pilot to spot an issue not long after the dive began and the crew made the decision to turn back at 2,000 meters. Govostes not-so-secretly hopes to have another dive in Alvin one day, and make it to the sea floor. 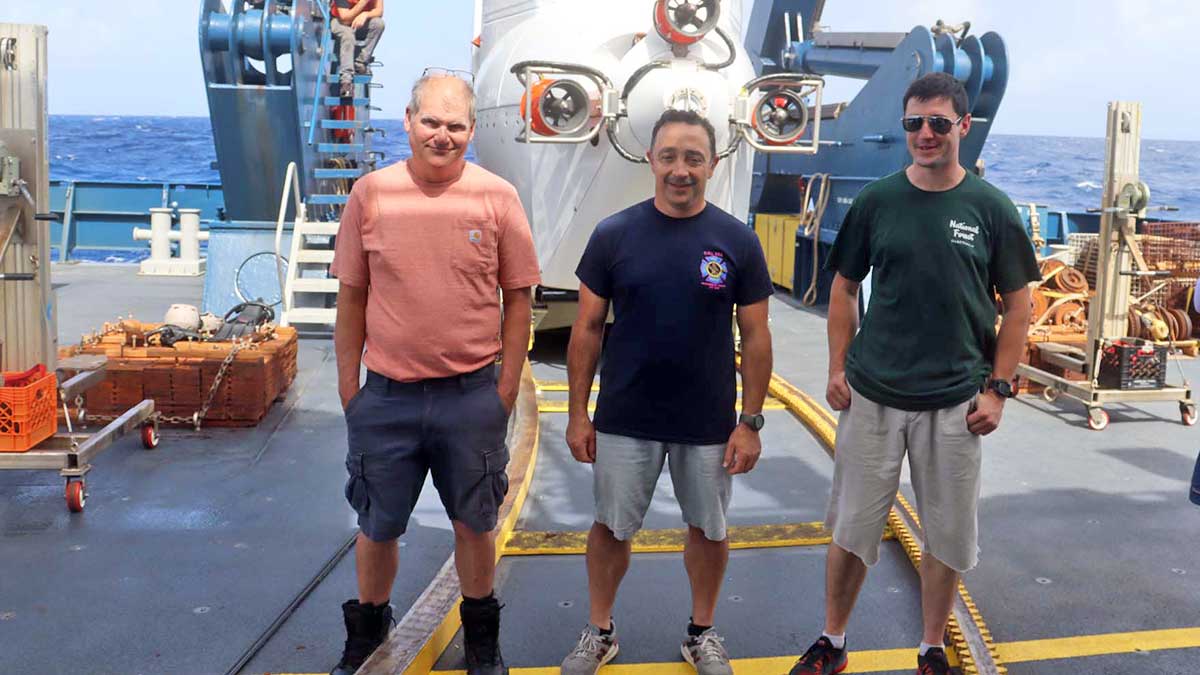 ElShakhs joined the Alvin Team less than one month before sailing and has a background working in aerospace. This is his first time at sea and also his first dive. It was an exciting ride.

“On the way down there was a pretty good chance we were going to turn around,” he said. “We had an electrical ground, which can be a problem, if you can’t fix it you have to end the dive.”

Alvin pilots routinely check for grounds, but they can become a safety issue if not handled correctly. After systematically shutting down electrical systems in the sphere, the pilot and co-pilot were able to isolate the ground and continue to the ocean floor.

The sub landed at about 4,500 meters on a rocky slope leading down into the trench. According to ElShakhs, there was a lot of life on the bottom. “There were white fish with long wispy tails, tall white sea sponges that were cone shaped, and brittle stars. Everything I saw was white except purple sea slugs.”

After taking in the view and completing system checks on that first ledge, they navigated down the slope until reaching a final depth of 5,182 meters, well beyond Alvin’s old 4,500-meter depth and making it Alvin’s second-deepest dive to date.

And it places ElShakhs and the two pilots of Dive 5084 on a list of only six people who have gone that deep in Alvin. But as sea trials continue with dives through the coming week, that exclusive group is on track to get a little bigger.