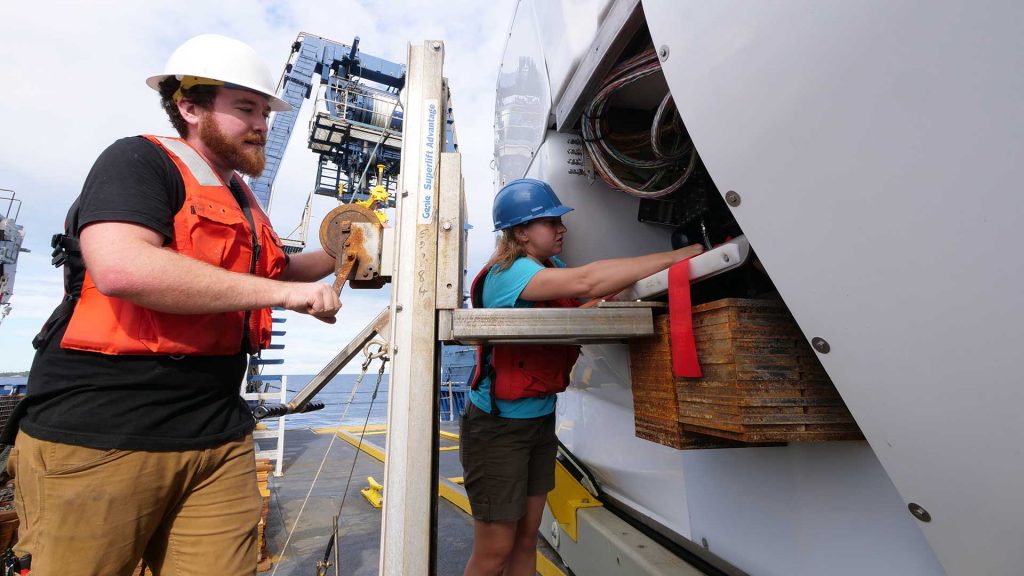 John Dymek and Rose Wall load a predetermined number of dive weights onto Alvin—something that can only be done once the sub is partly rolled out of its hangar. (Photo by Ken Kostel, ©Woods Hole Oceanographic Institution) 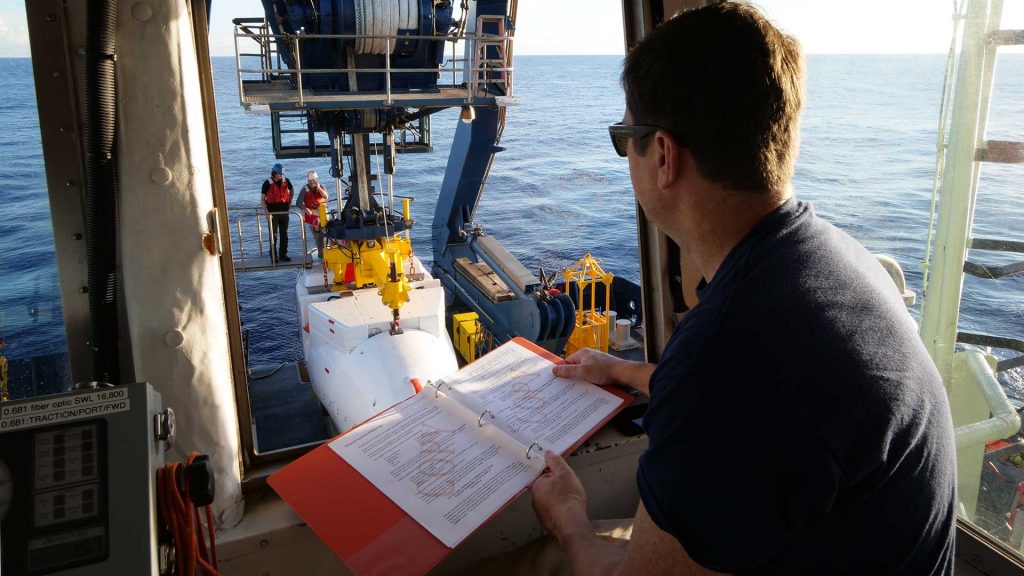 New Chief Engineer Sean Holmes watches the procedure for putting Alvin in the water from the ship’s Dog House, where controls for the launch and recovery system (LARS) are located. (Photo by Ken Kostel, ©Woods Hole Oceanographic Institution) 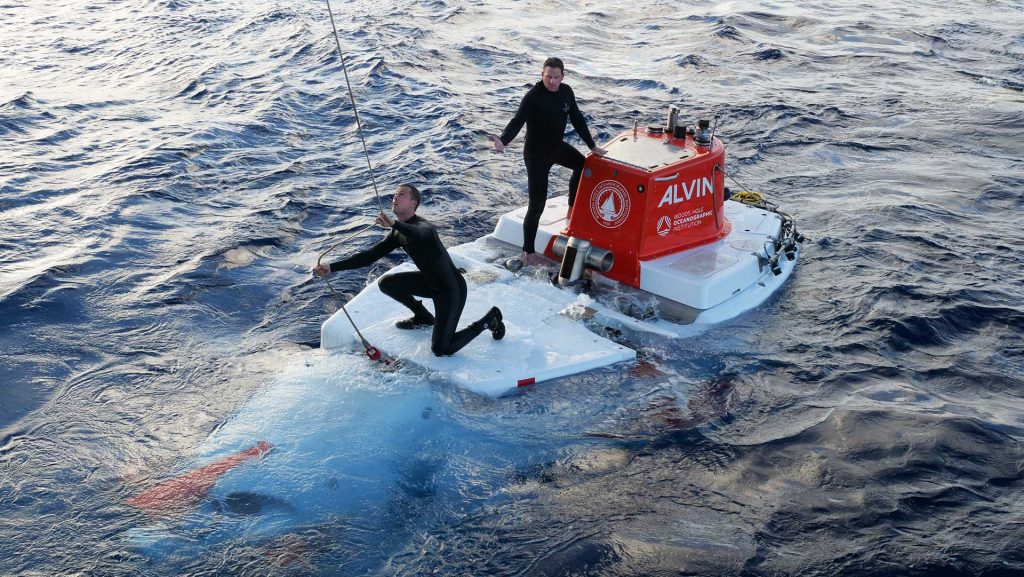 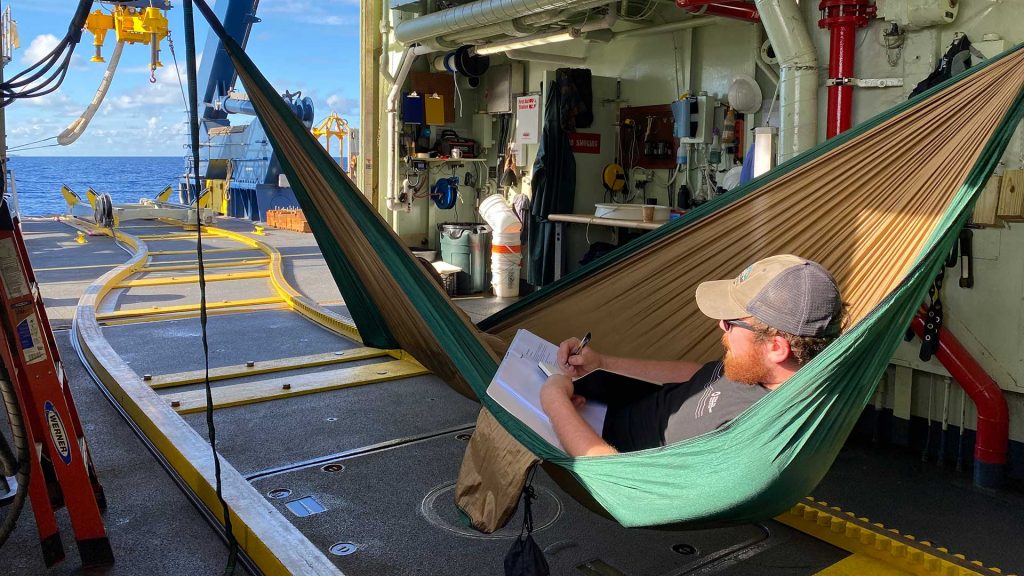 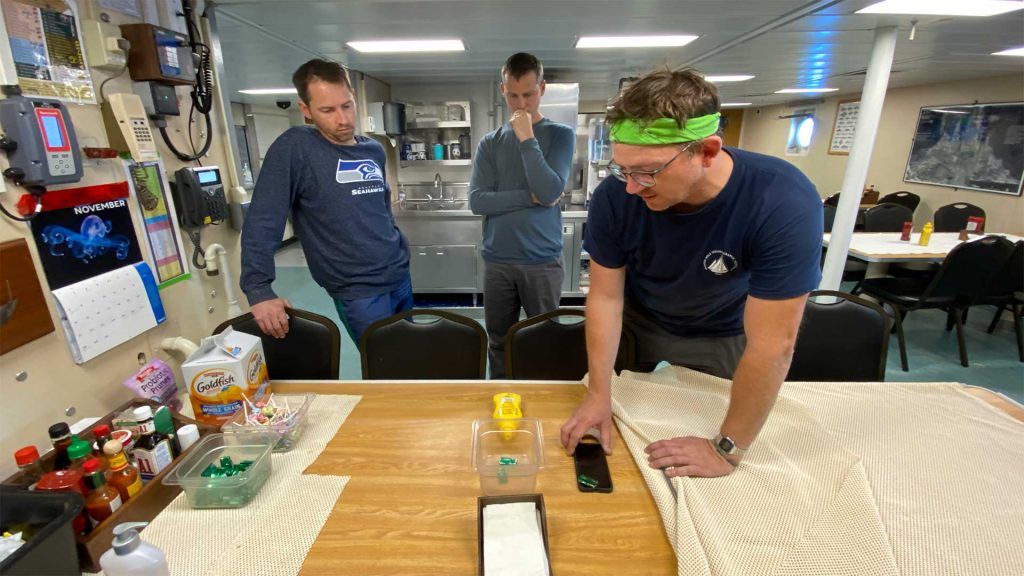 Atlantis third mate Kenny Beavers makes use of some things he found in the ship’s mess to show Expedition Leader Randy Holt and Alvin lead mechanical technician Fran Elder how recovery of the sub plays out from the perspective of the small boat and the swimmers. (Photo by Ken Kostel, ©Woods Hole Oceanographic Institution) 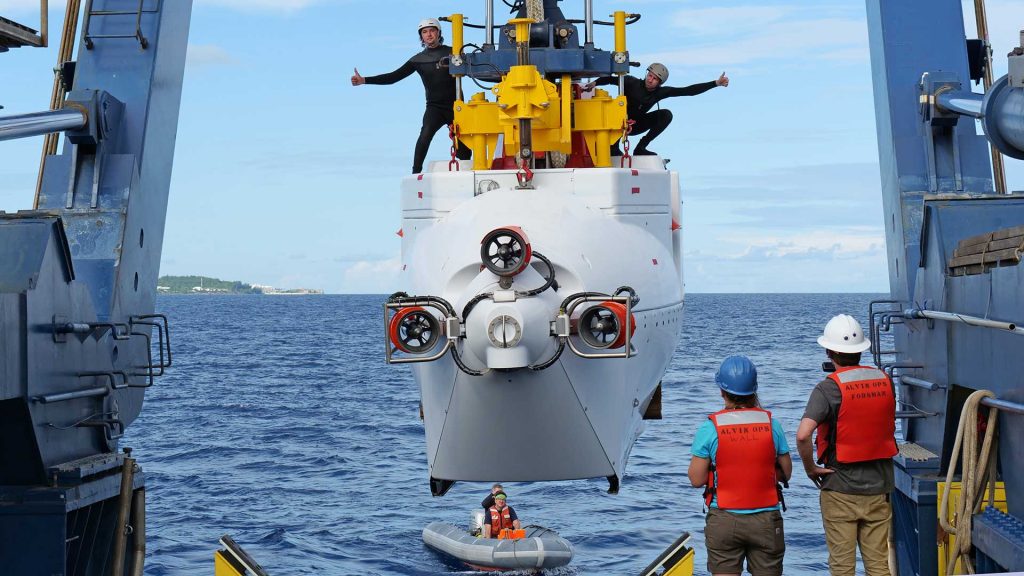 Swimmers Nick Osadcia and Randy Holt signal they see the main latch released and that Alvin is ready to be lowered while crew in the small boat and Atlantis stand by. (Photo by Ken Kostel, ©Woods Hole Oceanographic Institution) 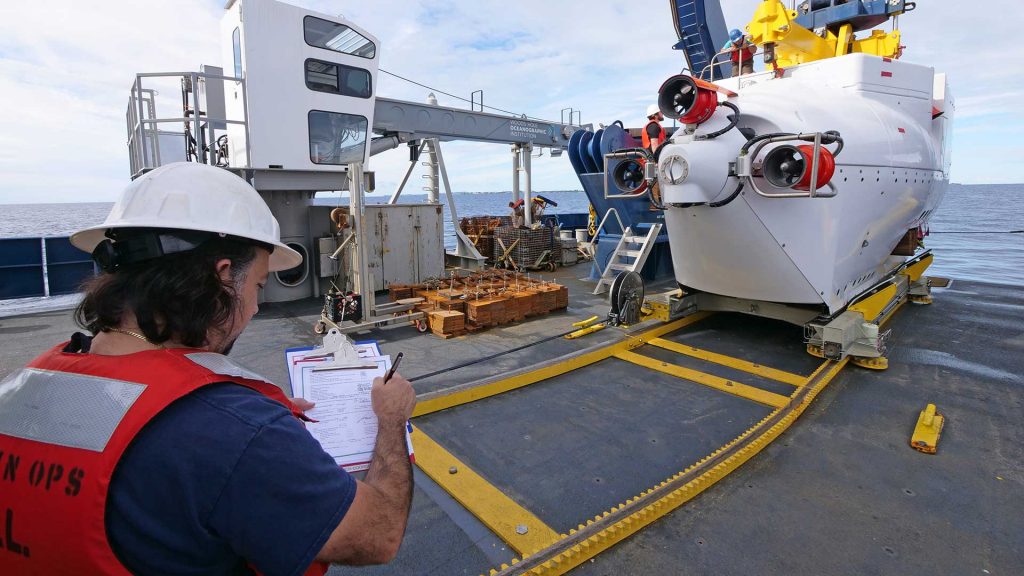 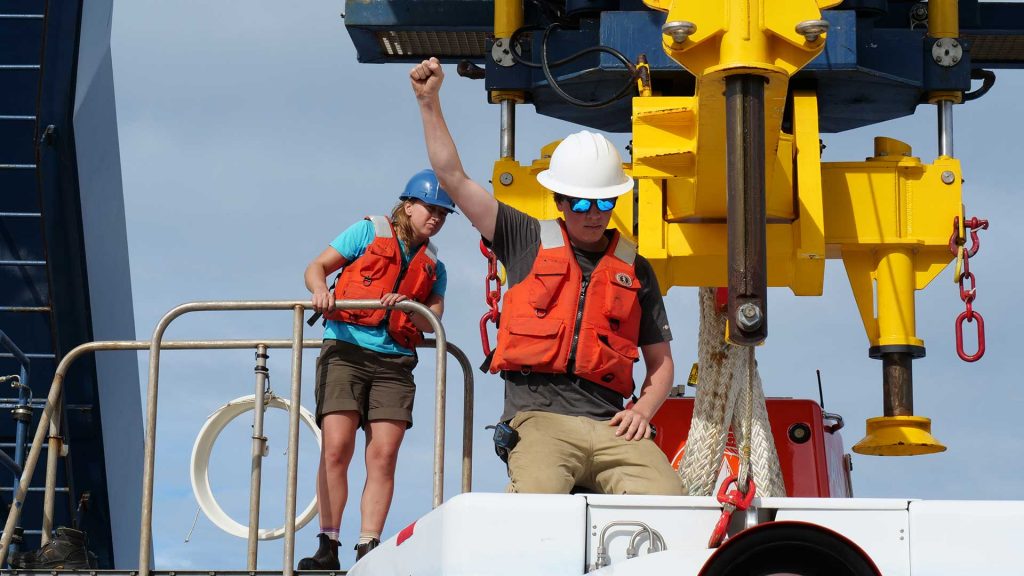 The first two open-water dives are in the book, with the sub descending to 100 meters Wednesday and Thursday to complete Phase 2 of Sea Trials. As much as the Alvin operations group needs to exercise the sub and its systems, they and the ship’s crew also need to refresh themselves on the detailed choreography of launch and recovery.

Each dive day, the entire ship becomes focused on one goal: getting the sub and its occupants safely into and out of the water so that it can complete its mission. There are teams on deck, on the bridge, in the ship’s Dog House and Top Lab, in the engine room, in the small boat, and of course in Alvin, each with their own specific tasks to complete, often in a specific order, and sometimes requiring intricate timing. The photos here represent just a few of the people and steps that go into the critical moments leading up to launch and culminating with it touching back on deck, a cycle that has happened more than 5,000 times on three different ships (Lulu, Atlantis II and Atlantis) over Alvin’s lifetime.

And on top of it all, the members of the Alvin Team who rotate through each of the positions on the aft deck are the same people who maintain the sub and, in the case of a few, also who pilot it. Bunk space is at a premium on the ship, so everyone has to be able to do several tasks. This trip is giving the old hands a chance to refresh their muscle memory and giving the new members (Rose Wall, Nick Ellis, Kaitlyn Beardshear, and John Dymek) an opportunity to see everything play out for the first time and begin their first steps in training toward becoming the Launch Coordinator in control of operations, or even a pilot. Even Randy Holt, the team’s Expedition Leader, is new to the team and, although he’s no stranger to submersible operations, is still learning how Alvin launches and recoveries play out.

Today’s dive to 500 meters—and deeper—is underway. It needs to cut short, however, so we can make a 5:30 p.m. rendezvous with the St. George’s Harbor pilot. We need to go back to port briefly the other day because, while lowering the ship’s ultra-short baseline tracking pole, which allows us to mark the sub’s location underwater, it got jammed inside its housing. The Chief Engineer, J.T. Walsh, had the brilliant idea of using ice to shrink the metal pole and its bearing just enough to free it, but not before a replacement unit was already on its way to Bermuda from WHOI. So, we’ll head in to pick it up and to have on hand as a back-up. We’ll also take the opportunity to do some quick repairs to the ship before heading back to sea to resume diving, probably on Sunday.