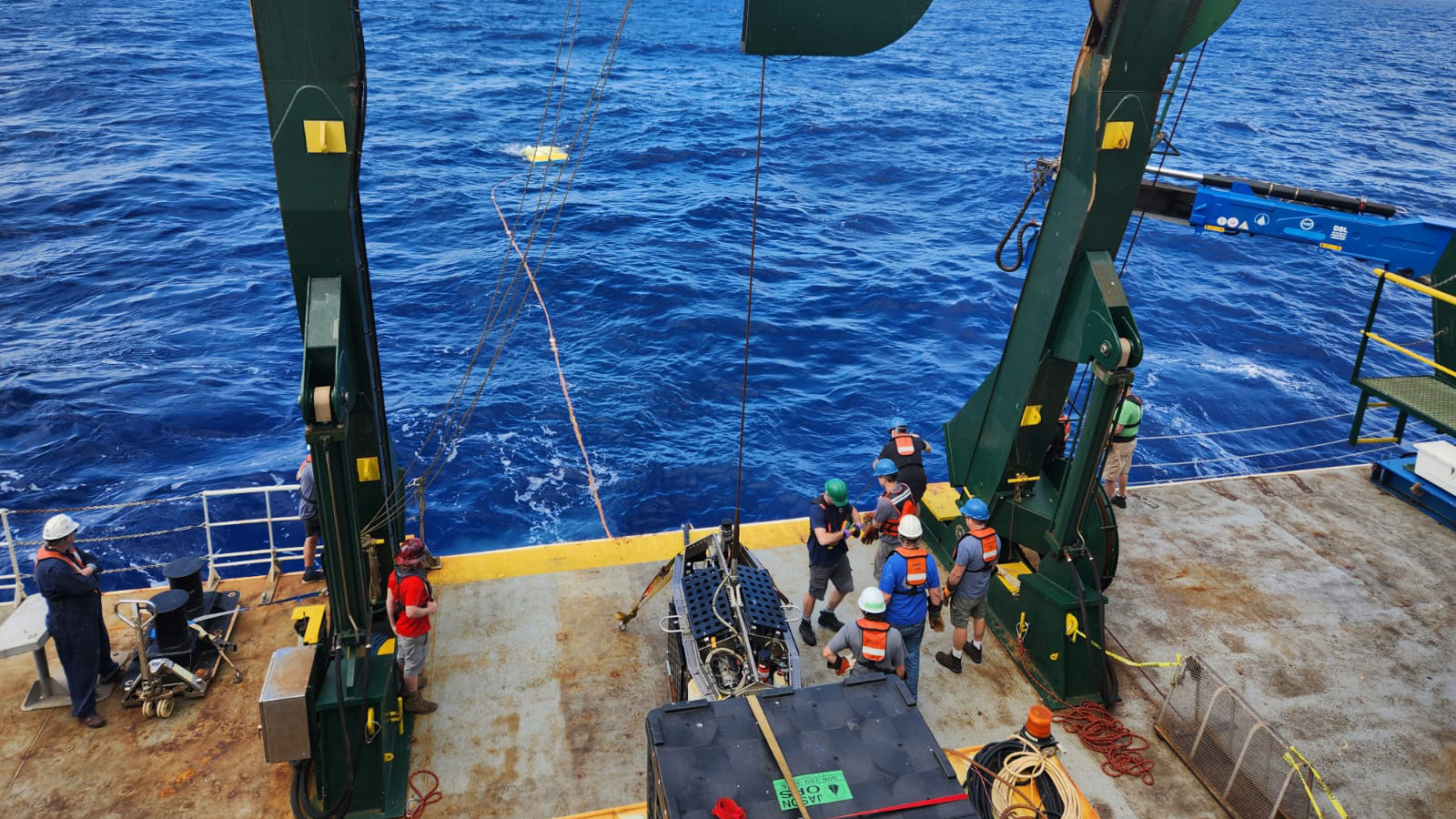 The successful recovery of Medea after a ship-wide power outage. Jason, which can be seen floating at the end of the tether cable, was recovered shortly after. Photo by Zachary Clayton.

January 9 was the second day of dedicated sample collection for the Kama’ehuakanaloa Hydrothermal Vents Expedition. By mid-morning, ROV Jason was on floor of Pele’s Pit, the newest crater at the underwater summit of Kama’ehuakanaloa (formerly Lo’ihi), documenting new hydrothermal vents and collecting samples. Excitement buzzed through the control van—the operations space for Jason’s pilot, navigator, and engineer as well as the research scientists on watch—aboard R/V Kilo Moana. Monitors in all the common spaces on the ship were tuned to the science camera mounted on Jason, allowing everyone to see through the ROV’s eyes. Jason was collecting a hydrothermal fluid sample at a new vent when suddenly all the screens in the control van (15 to be exact) went black. A ship-wide power outage had struck.

Those onboard faced no true danger. The Kilo Moana began to slowly drift without any power to run the propellers, but the ship was 18 miles offshore, and if the power was never regained tugboats could arrive well before the ship entered any hairy waters.

The safety of our beloved submarine robot, however, was less certain.Jason was at the base of a 700-meter-wide underwater crater with steep walls stretching over 200-meters-tall. Over a thousand meters of armored cable connected Jason to the ship, and the ship was starting to drift. If the ship were to drift too far, Jason could hit the crater walls or become tangled in its tether and suffer serious damage. 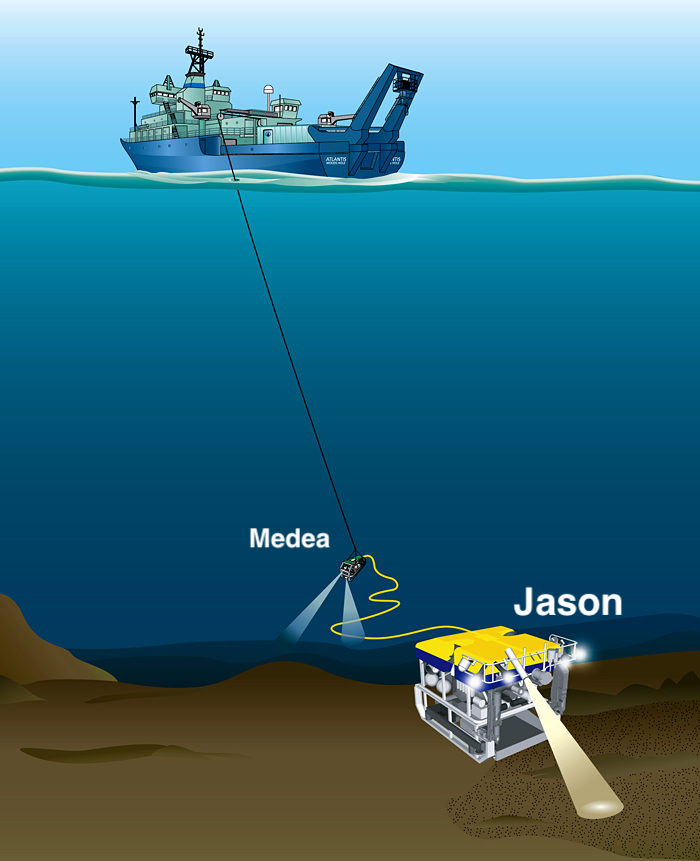 Illustration of ROV Jason and Medea connected by a tether cable to a research vessel. Modified from an original by WHOI Creative.

Jason was designed to be buoyant, so the Jason Team knew that as soon as electrical power was lost it would begin floating up toward the surface. In this case Jason was deployed directly beneath its sidekick Medea, which acts as something of a middleman between the ship and Jason (see illustration) so that Jason is not jerked around by the tug of the cable as the back of the ship moves up and down with wave motion.

,But while Jason was beginning to float upwards Medea was stuck in place, like a suspended deep-water anchor. With no power for the ship’s winch, we could not wind in the cable to raise Medea out of the crater which meant Jason, with only a 50-meter “leash” between it and its companion, couldn’t rise out of the crater either.

With the captain and crew ensuring the safety of everyone on board, the highest priority for what the Jason Team could contribute was clear: prioritize using whatever power became available, as soon as possible, to begin hauling Jason and Medea out of harm’s way.

The positioning of the tandem vehicles before the power outage was extremely fortunate. Jason was sampling a vent on the crater floor near the eastern edge of the Pele’s Pit. At the surface the Kilo Moana began to drift to the west, providing much more time to return power to the ship’s winch before Jason encountered the western wall of the crater. In another stroke of luck, the isobaric gas-tight sampler that Jason dropped when the power went out remained attached to the ROV by its electrical cable—even though it was hanging off the front payload basket and dangling in mid-water, the cable held long enough that when power was restored, the Jason pilots were able to fish it back aboard and bring it home safely.

Now that Jason was out of harm’s way, its ascent was slowed as it continued toward the ocean surface while elsewhere was a hive of activity. During the next hour, the Kilo Moana was able to return power to its propellers and control of the ship’s movement ready to welcome Jason and Medea back aboard ship and less than two hours from when the initial black out occurred, Jason and Medea were safely recovered and stowed onboard. 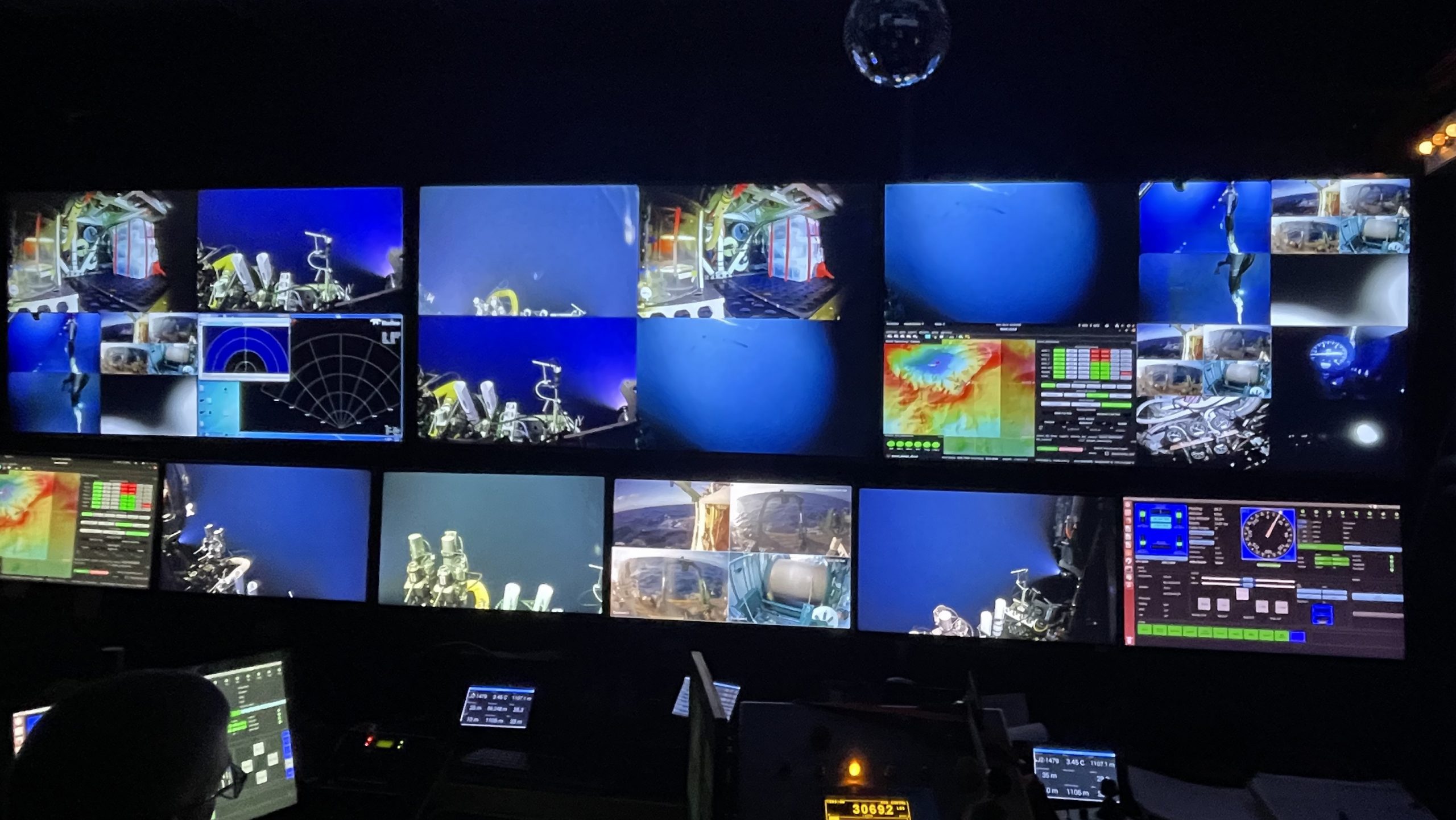 The wall of monitors inside the Jason control van. Image taken on the first dive of the expedition, an engineering and multibeam sonar mapping dive. Photo by Jessie Bersson.

While power outages aren’t excessively common on research cruises, this event does encapsulate the nature of conducting science at sea: anything that can go wrong might go wrong at any given moment and—as happened today—without any prior warning. Chief Scientist Chris German’s mantra is to treat every day at sea like it may be your last day for conducting science, which is why he always has a plan B (and a plan C, D, E, and F if it comes to it). It is also why Chris planned the first day of dedicated sample collection to accomplish the highest priority scientific objectives. Now, as the ship heads back to port where more complete troubleshooting of what happened can be conducted, scientists aboard the Kilo Moana are analyzing the samples and data from the first day of sampling.

The 2023 Kama’ehuakanaloa Hydrothermal Vents Expedition is an NSF-funded collaborative research expedition in January 2023. All blog posts from the expedition can be found at: https://ndsf.whoi.edu/category/kama-ehu-2023/.

This post was written by Jessie Bersson, an early career participant and science outreach contributor on the 2023 Kama’ehuakanaloa Hydrothermal Vents Expedition. The post was informed by interviews with chief scientist Chris German and other members of the expedition’s science team.