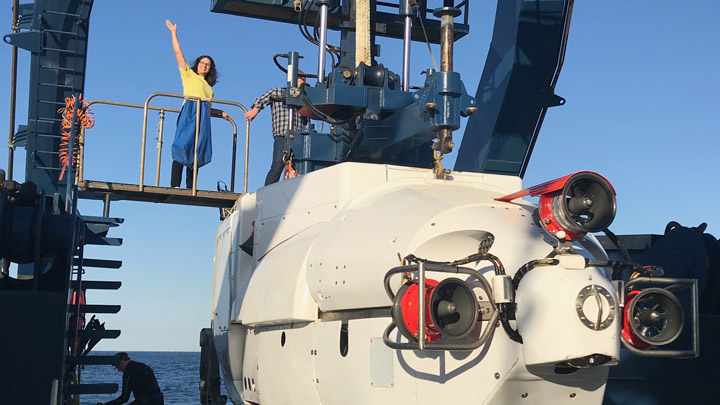 Shawn Arellano is a larval biologist and deep-sea ecologist and an associate professor at Western Washington University. Arellano has recently used all three NDSF vehicles as part of a collaborative project that focuses on the larvae of cold seep animals on both the Atlantic and Gulf sides of Florida. The lead principal investigator on this project is Craig Young at the University of Oregon and the co-PIs are Dave Eggleston and Roy He at North Carolina State University. This team has used the NDSF vehicles for a total of three cruises since February 2020. The upcoming fourth and final cruise on this project will be the first science party to use human-occupied vehicle Alvin after the 6500 meter overhaul.

What does your team want to learn about cold seep larvae?

For this project, we are modeling the dispersal of cold seep animals—mussels, crabs, and shrimp—from the Gulf of Mexico and the Western Atlantic Margin to see how connected they are. Our study focuses on six cold seep sites at three depths—paired depths on each side of Florida. Our shallowest sites are in the 400-to-700-meter range. The mid-depth sites are around 1000-meters and our deep sites are 2000-to-3000-meters. The different sites share similar communities, but not all the species are the same. The aim is to understand whether the depths at which the larvae disperse impact this difference or similarity in community members between the Gulf and the Atlantic seeps.

You have used all three NDSF vehicles on this project. How do Alvin, Jason, and Sentry help you do your research?

This project would not be possible without the NDSF vehicles; they are invaluable.

We use Alvin and Jason to collect samples that will be used to do larval biology and behavior studies in the lab. We also collect larval shell samples for geochemistry work. We are trying to use isotopes to determine whether the larvae migrate to the surface waters and geochemical signatures to determine connectivity between seeps.

Can you collect samples with Sentry?

Yes! We are using a new sampler called SyPRID (Sentry Precision Robotic Impellor-Driven). It’s a larval plankton pump that draws water through a big net as Sentry drives around. Craig Young had a hand in developing this tool and we’ve been working a lot with Sean Kelly and the rest of the Sentry Group to integrate it into this project.

We’ve been using the SyPRID sampler within about 5-to-8 meters of the seafloor to get a really near bottom sample, which is great, because it’s hard to get a near bottom sample of plankton. We also take a deep midwater sample and a sample in the permanent thermocline. The Sentry team really did a great job of figuring out how to make this complicated sampling scheme happen!

One great thing about the SyPRID sampler is that it gives us a lot of plankton. The samplers filter for an entire Sentry mission. For our missions, on average we were filtering about 2500 cubic meters  (660,000 gallons) of water per sample. 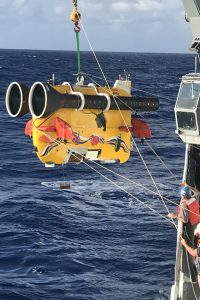 AUV Sentry outfitted with the SyPRID sampler and decorated with decals representing some of the types of larvae that would be gathered during sampling.

How do you look for the larvae?

We sort all of our SyPRID samples on the ship, so we usually bring a team of undergraduates and graduate students. We sort through all the plankton under microscopes and separate out all the different types of larvae we get. Then we photograph all the larval types. So, we bring out a bunch of microscopes and a bunch of students and we all sit there and sort everything together right after Sentry comes up. It is quite an operation! During our last cruise we had both the SyPRID sampling from Sentry and we had Jason operations as well, so we were doing round the clock sorting operations to get through processing all the samples. It got a little crazy, but was a lot of fun!

And how is the experience of using Jason and Alvin different?

One thing I really like about using Jason is that you can have so many people in the control van with you. It is a collaborative and collegial environment to work in. It gets very exciting when everyone is watching the amazing video of the dive.

Working in Alvin, a human-occupied submersible, everything looks different. You get a more realistic perspective of what the environment is actually like. Being within that landscape is spectacular. You see things that you may not see with Jason’s video cameras. You can observe things you wouldn’t see otherwise—like the little plankton outside of the viewports—you can’t see them when you’re looking at a two-dimensional screen because the video doesn’t have the same depth perception that your eyes do. On the other hand, Jason can operate for more than 24 hours in one dive, and Alvin cannot (nor would I want to!). 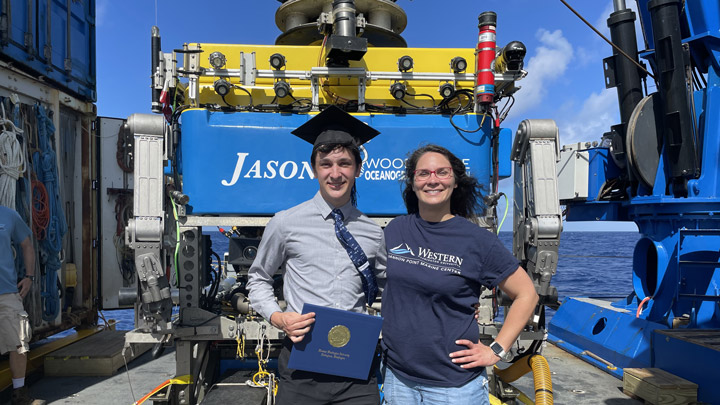 Dexter Davis (WWU, 2021) graduated with his B.S. in Environmental Science during our last research cruise on this project. Here he is with Shawn Arellano, his research advisor, right after ROV Jason presented him with his diploma.

How does studying larvae fit into the big picture of ocean science?

With climate change, we’ve seen a variety of impacts like biogeographic shifts in where animals live, for example. We are beginning to understand those impacts pretty well for coastal species but we really don’t understand them for deep water species. Also, understanding the connectivity of populations is really important as we think about managing the deep ocean. We need to understand an ecosystem’s potential for recovery (including through processes like supply of larvae) before decisions are made about exploiting that ecosystem’s resources.